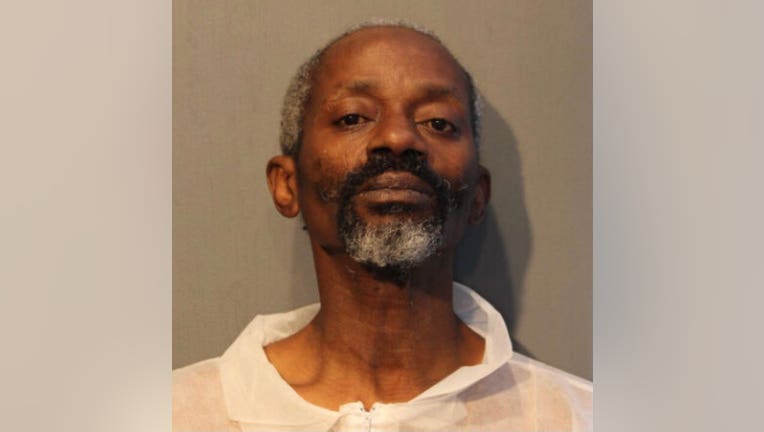 CHICAGO - A man is facing murder charges after stabbing another man to death Sunday in the Englewood neighborhood.

Anthony Moody, 55, was arrested after allegedly stabbing a 32-year-old man to death around 9:30 a.m. in the 5600 block of South Peoria Street.

The man was taken to the University of Chicago Medical Center, where he was pronounced dead, police said.

Police said Moody was taken into custody minutes after the attack.

Moody said he was defending himself when he stabbed his daughter-in-law’s boyfriend to death during a domestic dispute over the weekend.

Chicago police recovered the knife allegedly used to kill Webster from a garbage can at the gas station where Moody was taken into custody.

The day before the stabbing, police officers were called to Moody’s home where he lives with his daughter-in-law and her children, including some of Moody’s grandchildren, Murphy said.

Moody has a "father-daughter" relationship with his daughter-in-law who had previous domestic disputes with Webster, who also lived at the residence, in the 5600 block of South Peoria Street, and had been "tearing the home apart," Murphy said.

When police arrived at the home Saturday morning, all three adults were arguing with each other. At one point, Webster allegedly threatened to put Moody and his daughter-in-law in the hospital.

Later Saturday, after the officers had left, Moody made "angry comments" when he noticed Webster’s children had returned to the home, knowing that it meant his daughter-in-law had reconciled with Webster, Murphy said.

Webster returned to the home early the next morning and went to sleep.

Hours later, Moody’s daughter-in-law and Webster were playing with the children when two of the kids ran into Moody’s room, Murphy said. Moody allegedly told the couple it was too early for that much noise, prompting Webster to tell Moody that he would play with his children however he liked and that Moody could leave if he didn’t like it.

As Webster turned to leave, Moody got out of his chair and stabbed Webster in the side of his neck, Murphy said. Moody’s daughter-in-law was also cut when she tried to put her arm in the way, believing Moody was trying to punch Webster, Murphy said.

After the stabbing, Moody — without a shirt or shoes on and still holding the knife — went to the gas station where he asked the clerk to call police but didn’t say why, Murphy said.

Given Moody’s appearance, the tow truck driver at the business began filming him with his cellphone.

"She let him back in at 4 a.m. When she let him back in I didn’t even know the motherf———was in there til he came in the room where my grandbaby sleeps and sucker punched me, and he didn’t know I had a f——— knife in my f——— hand, and then I got up and boom, boom," Moody allegedly can be heard saying on the recording while making a stabbing motion.

Moody was trying to defend himself from Webster, who has a history of violence, an assistant public defender told Judge John F. Lyke Jr.

Moody went to the gas station to "try to get away" from Webster, the defense attorney said. "He tells the cashier … to call the police and he waits for the police and then he cooperates with the police."

Lyke ordered Moody held in lieu of $200,000 bail. If he is able to post bond, the judge recommended that Moody be placed on electronic monitoring.

Moody is expected back in court May 27.