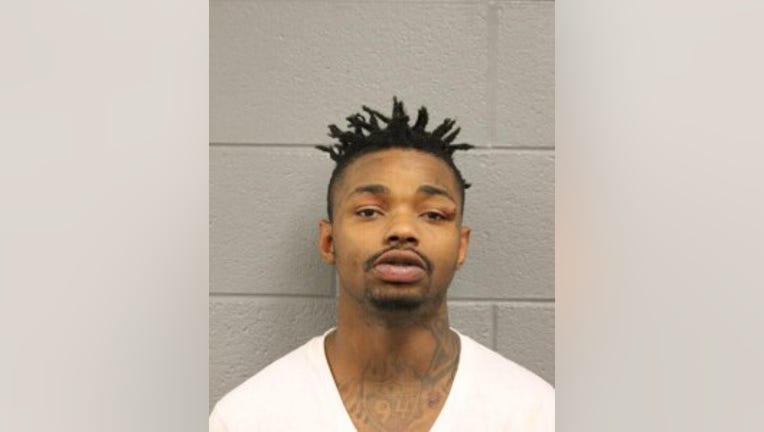 CHICAGO - A 26-year-old man charged with a fatal April shooting on the West Side allegedly fired 31 rounds at the man he is accused of killing, prosecutors said.

Charles Collins is charged with first-degree murder in the April 14 death of Robert Carter, 36, according to a bond proffer prepared by Cook County prosecutors.

About 3:30 p.m. that day, Carter was in a parked 2020 Toyota Highlander in the 300 block of South Homan Avenue when Collins drove up in a 2019 silver-colored Jeep Compass, prosecutors said.

Collins allegedly got out of his car and fired 31 rounds at Carter. Someone in the back seat of the Jeep also got out and pointed a rifle at Carter but did not fire any shots, prosecutors said.

Carter drove away, and a person jumped out of the passenger seat of his car as he escaped the gunfire, prosecutors said.

Carter suffered gunshot wounds to his head and hand but managed to drive himself to Stroger Hospital, where he was later pronounced dead, prosecutors said.

The incident was captured on video and shows that the driver of the Jeep was the shooter, prosecutors said.

Moments later, the same Jeep was involved in a second shooting about a half block away in the 3400 block of West Fifth Avenue, according to prosecutors. A person was sitting in a vehicle when someone in the Jeep opened fire, striking him in the forearm.

Officers responding to that shooting saw the Jeep traveling at high speed near Homan and Madison and started a pursuit, prosecutors said. The Jeep turned onto Sacramento Boulevard and crashed head-on with another vehicle.

Collins ran from the driver’s seat and was taken into custody after a brief foot chase, prosecutors said, while someone else who was in his car made good on their escape.

Officers found a rifle and two semi-automatic pistols in the Jeep. One of the pistols had been equipped with a switch designed to fire the gun in semi-automatic and fully-automatic modes, prosecutors said.

Collins allegedly tested positive for gunshot residue, and shell casings from the two shootings matched the two pistols found in the Jeep, prosecutors said. However, charges have not been filed in the second shooting on Fifth Avenue.

Collins was ordered held without bail Thursday and is due back in court December 29.