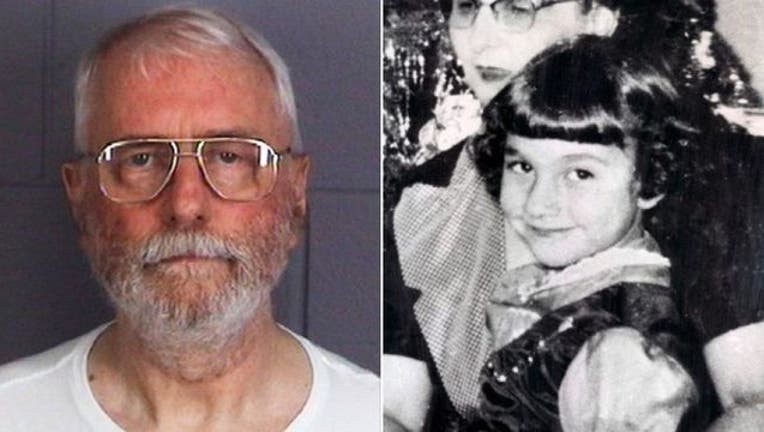 Jack McCullough, of Seattle, in 2011, and an undated photo of Maria Ridulph with family members in Illinois. (DeKalb County Sheriff's Department/Courtesy the Ridulph family)

CHICAGO (AP) - Jack McCullough awoke a few months into his life sentence for the 1957 slaying of an Illinois schoolgirl as his cellmate plunged a shank fashioned from a toothbrush into his face, eventually dislodging his eye.

Multiple inmates had vowed to kill him to avenge Maria Ridulph, he said in phone interviews Sunday and Monday, and his bunkmate was seeking to make good on that pledge. Court records show his cellmate was convicted in the attack, in which McCullough said surgeons at a Chicago hospital were able to save his eye.

McCullough, a former police officer and security guard in Washington state, was released from prison on Friday after a judge vacated his 2012 conviction the same day based on a chief prosecutor's finding that he was 40 miles away when the 7-year-old was abducted, so he couldn't be the killer. The 76-year-old spoke to The Associated Press about his four years behind bars and what comes next: a lawsuit against the state of Illinois.

McCullough said one thing he did not suffer in prison was a guilty conscience.

"I knew damned well I was innocent," said McCullough, speaking by phone from an acquaintance's home near the northern Illinois town of Sycamore, where Maria went missing.

Maria and a friend were playing in the snow outside of her Sycamore home on Dec. 3, 1957, when a young man approached and offered them piggyback rides. The friend dashed home to grab mittens, returning to find Maria and the man gone. The search for Maria made headlines at the time, and her decomposed body was found months later in a forest.

McCullough was born in Belfast, Ireland, and came to the U.S. with his mother in 1946 and settled in Sycamore, where he lived until he was 18. The Ridulphs were neighbors. He then spent 14 years in the military, including a stint in Vietnam. Later, he worked as a police officer in Washington state, and worked as a security guard at a housing complex when he was arrested in 2011.

Among the reasons investigators decided to look anew at McCullough, whom police had cleared as a suspect in the 1950s, was that one of his half-sisters told authorities that their mother said on her deathbed she believed her son may have killed Maria.

A scathing report from Dekalb County State's Attorney Richard Schmack in March described the investigation and trial of McCullough as deeply flawed, zeroing in on what he described as investigators' erroneous statements to a grand jury that altered the known timeline of events to render McCullough's alibi moot.

Most inmates viewed McCullough as the lowest of the low — a child killer — which he says put him in constant peril inside the maximum-security Pontiac Correctional Center until he eventually moved to protective custody.

McCullough said he often spent 23 hours a day locked in an 11-foot-by-5-foot cell, maintaining his emotional balance, he said, by delving into the study of Chinese.

"It gave me my mental escape," he said. "Chinese saved my life."

He also wrote letters to the Illinois attorney general, the governor and president pleading for their intervention. All went unanswered. "I didn't have anger. I had determination," he said.

A turning point in his bid for freedom came Jan. 1, when a new rule took effect that required Illinois state's attorneys to be proactive about reviewing plausible claims someone had been wrongly convicted. McCullough had filed a court document pointing out that obligation to Schmack, whose predecessor prosecuted McCullough.

Now that he is out, McCullough says one of his missions is to highlight what he alleges is a prosecutorial culture of winning at all costs, even in cases like his where evidence doesn't point to guilt.

And a lawsuit would help ensure the state will pay a monetary price for what he and his family went through, especially his wife, who was left on her own in Washington state when he was arrested, he said. He also has stepchildren and grandchildren.

"They didn't just punish me, they punished ... my whole family. I want the state to be (held) responsible."

Schmack said last week that his office would use its discretion and not retry McCullough, who the judge said must stay in Illinois until such a decision is official. There's another hearing Friday, at which a judge will consider a Ridulph family request for a special prosecutor to look at the case.

McCullough's first days of freedom included shopping, taking walks and getting a proper haircut, but in the future, he'd like to write a Chinese-language textbook, as well as travel to both China and Japan.