Man, 21, dies after being pulled from Lake Michigan at Oak Street Beach

A 21-year-old man died after he was pulled from Lake Michigan at Oak Street Beach early Wednesday.

CHICAGO - The body of a man from Poland who went missing after a night out in Chicago was recovered from Lake Michigan Wednesday morning.

Krzysztof Szubert, 21, was found unresponsive in the lake around 2 a.m. Wednesday near Oak Street Beach. He was rushed to a local hospital where he was pronounced dead a short time later, police said.

He, along with other coworkers, were staying at a Joliet hotel. However, over the weekend, they came to the city, first hitting the Chriskindlmarket and then spending two hours at the popular bar Howl at the Moon on Hubbard Street.

Szubert was previously last seen around 9:45 p.m. on Saturday in River North.

A man from Poland temporarily working in the suburbs is missing after a night out in Chicago.

"He wouldn't ever do something like this. If he was in trouble or needed to get somewhere, he would reach out," said a friend, Michal Osiecki.

Szubert is from the city of Tiffin in Poland. He came to America for just a few months working on a project in the southwest suburbs as a software developer.

"He is smart, young and very bright," said Osiecki. 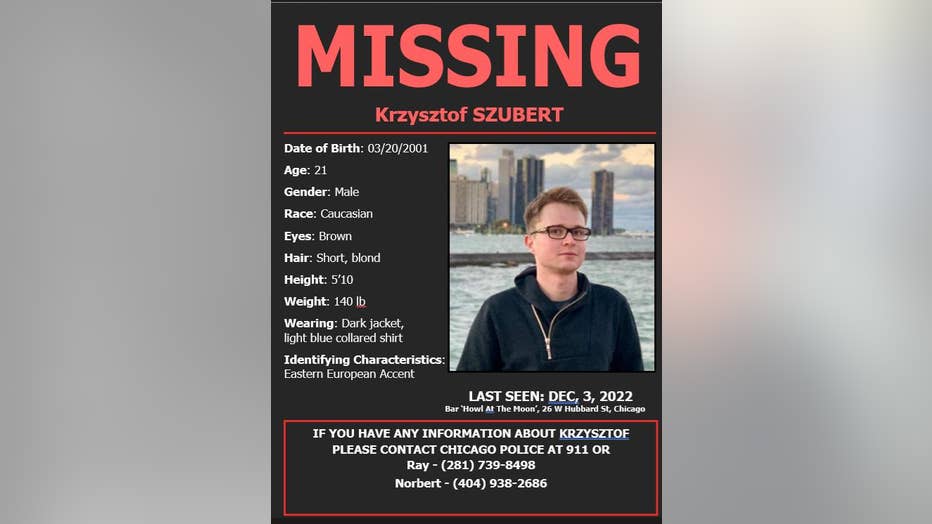 "We figured that since we couldn't find him inside the bar, wasn't picking up his phone, he just took an Uber back with somebody else," said Osiecki.

On Sunday morning, they realized Szubert was missing and his friends went back to River North, retraced their steps and started putting up posters.

Szubert was supposed to go back home to Poland next weekend.

Chicago police have launched an investigation looking into Szubert's death.