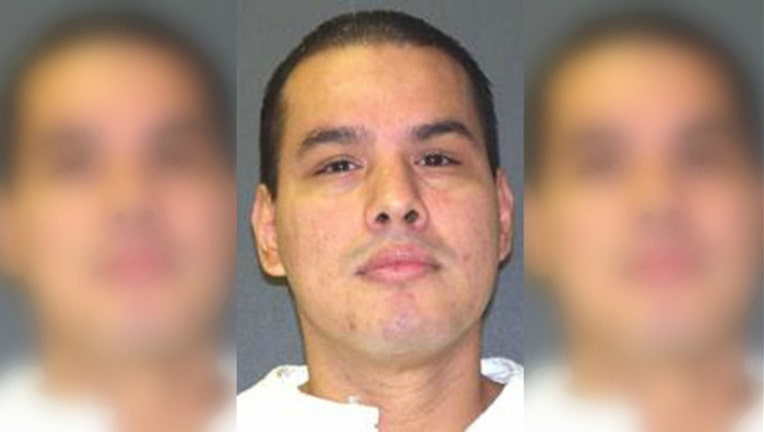 HUNSTVILLE, Texas (AP) -- The U.S. Supreme Court has been asked to block the scheduled execution of a South Texas man for the 1998 slaying of a 12-year-old boy, whose blood the convicted killer said he drank.

Pablo Lucio Vasquez, 38, told police he was drunk and high when voices convinced him 18 years ago to kill David Cardenas by beating the seventh-grader with a pipe and then cutting his throat. He also told detectives in a videotaped statement that he lifted the boy's body, allowing the blood to drip on his face, and drank it.

Vasquez's lethal injection on Wednesday evening would be the 11th execution this year nationally and the sixth in Texas.

Vasquez's lawyer, James Keegan, appealed to the Supreme Court for a reprieve so the justices can review whether several potential jurors improperly were excused from Vasquez's capital murder trial because they either were opposed to the death penalty or not comfortable making such a judgment.

State lawyers opposed any delay, arguing the potential jurors' exclusion was legally proper and that the latest appeal was similar to an unsuccessful one 12 years ago and amounted to "nothing more than a meritless attempt to postpone his execution," Assistant Texas Attorney General Jeremy Greenwell told the high court in a filing Tuesday.

Earlier, unsuccessful appeals, including one rejected last month by a federal judge, focused on whether Vasquez was mentally ill and should be ineligible for the death penalty.

Court records show Vasquez, his 15-year-old cousin, Andres Rafael Chapa, and Cardenas, Chapa's friend, all attended a party in Donna, a Texas border town where Vasquez and Chapa lived. Cardenas was from nearby Alamo, also in the Rio Grande Valley, and was spending the weekend with Chapa.

The killing occurred April 18, 1998, after the three left the party. Vasquez told authorities as they reached a wooden shed, he started hearing voices telling him to kill Cardenas.

"Something just told me to drink," Vasquez said in the statement to police.

"You drink what?" a detective asked.

Police received an anonymous tip about the slaying that led them to Chapa and eventually to Vasquez, who was arrested in Conroe, a Houston suburb more than 325 miles north of Donna. Authorities found the body -- missing some limbs and nearly decapitated -- five days later under some scraps of aluminum in a vacant field.

Vasquez told detectives he took a ring and gold necklace from Cardenas and that Chapa, using a shovel, also participated in trying to decapitate the boy. "The devil was telling me to take (the head) away from him," Vasquez said, adding that "it couldn't come off."

Vasquez declined an interview request from The Associated Press as his execution date neared. His statement to police about the devil and drinking blood fueled speculation about satanism, but the subject never came up at Vasquez's trial or in appeals.

"Did he drink it? I don't know," Orendain said.

Chapa pleaded guilty to a murder charge is serving a 35-year prison term. Three other relatives of Chapa and Vasquez received probation and a small fine for helping cover up the slaying. One of them was deported to Guatemala.