Man caught on camera torching vehicles on Chicago's West Side

Chicago police are looking for an arsonist who torched three cars on the city's West Side over the weekend, and the crime was caught on camera.

CHICAGO - Chicago police are looking for an arsonist who torched three cars on the city's West Side over the weekend.

The brazen crime was caught on camera and the man at the center of it appeared unfazed, according to surveillance video.

Luckily, no one was hurt but all three vehicles were destroyed. Now, one landlord is sounding the alarm to make others aware.

It took place in an alley in the 2800 block of West Polk Street – less than one mile from Riot Fest, an event that already had some neighbors on edge.

"I hear little sparks outside, so I thought maybe it was fireworks," said Alex Roman, landlord. 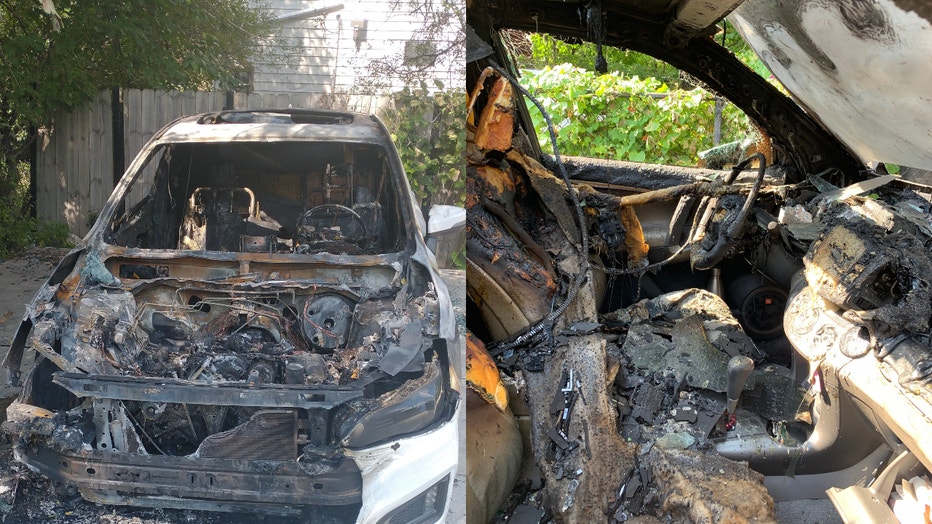 It’s a sound that got Alex Roman out of bed Saturday morning. But to his surprise, raging flames were the cause of the commotion – not fireworks.

Concerned the flames might spread to his building, he got his tenants to safety.

"I run out downstairs and call the police," said Roman.

Soon enough, the cars were engulfed in flames and the arsonist is seen on video casually walking away. Roman said it appeared he only stopped because he ran out of lighter fluid.

"You see him very calmly putting lighter fluid into these cars and lighting them on fire, seemed obviously very deliberate and seemed like he had experience doing it. I was just so angry seeing it," said Roman.

Three different women were victimized. Two of them live in the building Roman owns.

"As a landlord, one of the things you want to take pride in is the safety of your tenants," Roman said.

Grateful for firefighters who arrived before the flames spread to his building or caused any injuries, Roman is sharing what happened in an effort to warn other community members.

"If somebody is willing to do this, they’re willing to do it again, and I’m just worried that some people who don’t have security cameras or who aren’t going to wake up at 3 a.m. and maybe aren’t as alert as I am, you know, it could be a lot worse," said Roman.

Roman is now offering a $2,000 reward for information leading to an arrest.