MESA, Ariz. - Police say a 21-year-old man who was driving over 100 mph in Mesa before crashing into another car, killing an elderly man and his wife, was arrested.

According to Mesa Police, the crash happened at about 5:30 p.m. on March 22 near Main Street and Lindsay Road.

First responders arriving at the scene discovered that two vehicles were involved in the crash – a 2009 Chrysler 300C and a 2017 Chrysler Pacifica. The passenger in the Pacifica, 82-year-old Ronald Hettich, was pronounced dead at the scene. Hettich's wife, 80-year-old Irma, was driving the car at the time of the crash. She was taken to a hospital where she was pronounced dead.

The driver of the Chrysler 300C, 21-year-old Gezane Izreal Cabanillas-Lape, was not seriously hurt. A 21-year-old woman riding with him underwent surgery for internal bleeding. 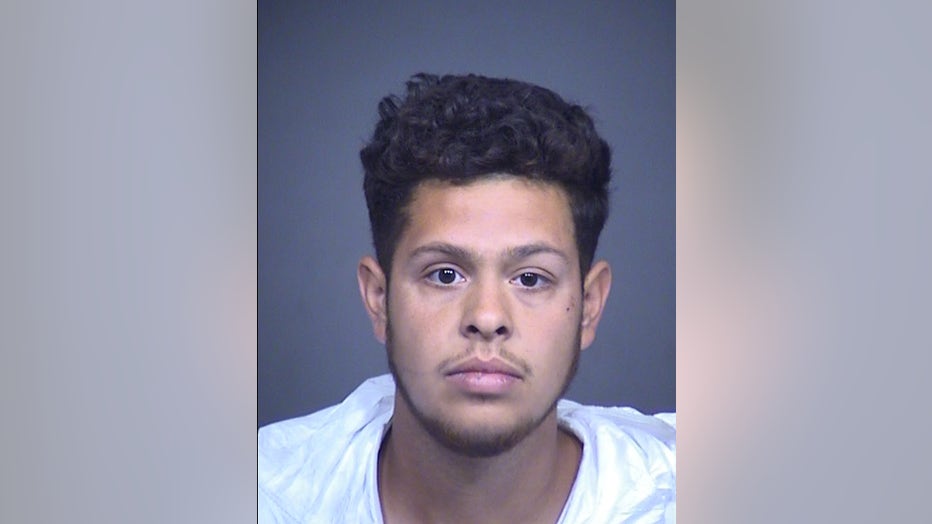 "The investigation revealed that the Hettich's were traveling north on Windsor crossing over Main St. when Cabrillas-Lape[sic] who was traveling[sic] westbound on Main St. at a high rate of speed colliding with the passenger side of Hettich's vehicle," police said in a news release.

The suspect's car then hit a curb, a tree, a street sign and a metal fence, officials said.

Investigators say Cabanillas-Lape was driving over 100 mph in a 45 mph zone at the time of the crash. He showed no signs of alcohol or drug impairment.

Cabanillas-Lape was arrested and booked into jail. He is accused of two counts of second-degree murder and one count of aggravated assault.

"I didn't think anybody could survive that," said Ray Dittler, who was coming home right after the crash. "I just saw the car kind of smashed up against the wall and I didn't know what happened."

It wasn't until afterward, residents at Trail Riders Ranch learned it was two of their own, Ronald and Irma.

"With the elderly folks living here and stuff like that, it's very, very bad. I hope they do something about it …," Gary Bowden said.

The Hettich's are snowbirds from up north, like many in the community. "We just knew them for the last 8-10 years and they were just super people," Irvin Leinen said.

It's hard for the couple's friend to get out the words. "Very, very caring people. They would do anything for anybody," Leinen said.

A person was killed in a two-car crash, the Mesa Police Department said on March 22, and others were also injured.

21-year-old Gezane Cabanillas-Lape was arrested for second-degree murder and aggravated assault after a high-speed car crash that killed an elderly couple and injured his passenger.