Stocks are opening sharply lower on Wall Street, extending a weeklong rout and bringing the Dow Jones Industrial Average 10% below the record high it hit two weeks ago.

WASHINGTON - Stocks are opening sharply lower on Wall Street, extending a weeklong rout and bringing the Dow Jones Industrial Average 10% below the record high it hit two weeks ago.

Investors continue to dump stocks and shovel money into ultra-safe assets like bonds as they fear that the spreading virus outbreak will weigh heavily on the global economy by slowing down manufacturing, travel and spending. More companies including Microsoft and Budweiser maker InBev are warning their results will be hurt. The Dow lost 393 points, or 1.4%, to 26,586. The S&P 500 lost 48 points, or 1.6%, to 3,068. The Nasdaq fell 179 points, or 2%, to 8,800.

Global stock markets fell Thursday on concerns that the coronavirus was spreading to more countries, putting further strain on businesses and supply chains across the world. 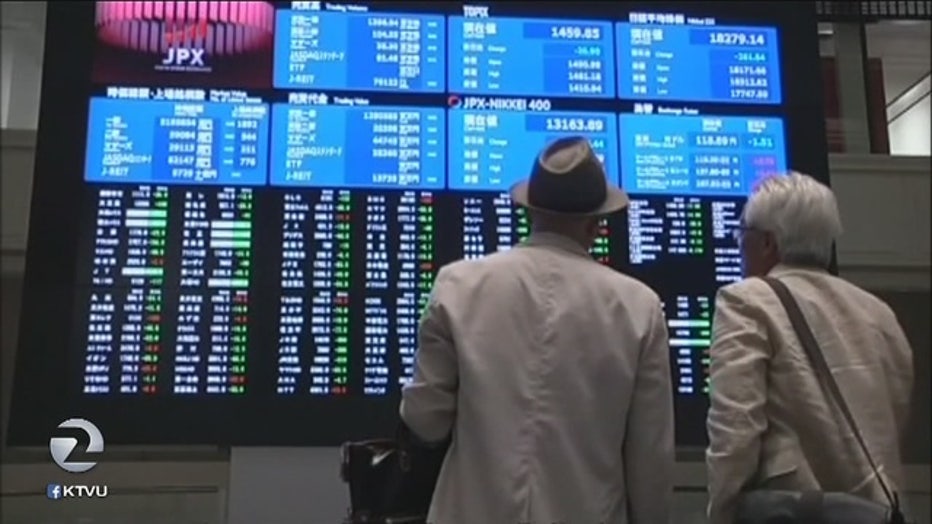 Traders are concerned the global economy could stumble as major industrial countries struggles to contain the outbreak.

Microsoft said the outbreak in China was hurting it more than expected. Frankfurt airport said it would reduce some staff work hours as it saw a heavy drop in aviation. Shares in airlines like International Airlines Group and easyJet, a big European budget carrier, were down by double digits.

"Previous crisis playbooks have all revolved around buying the dip in equities, so I wonder just how much further the fire sale will go before the market at least starts to scale in again," analyst Stephen Innes of AxiCorp. said in a report. "But based on last night's price action, it does appear that any bounce in stocks is likely to be short-lived. And eventually, the markets could fall deeper as investors start to think what's the point of trying to pick the bottom in the short term."

President Donald Trump announced late Wednesday that the U.S. was stepping up its efforts to combat the virus outbreak that began in China, as the number of cases surpassed 81,000.

He said he was open to spending "whatever's appropriate" to fight the virus, after the Senate Democratic Leader Chuck Schumer of New York suggested $8.5 billion instead of the requested $2.5 billion. He put Vice President Mike Pence in charge of the response to the virus outbreak.

Trump said he didn't believe a pandemic was inevitable, though health officials standing beside him warned more infections are coming. And shortly after Trump spoke, the government announced that another person in the U.S. was infected -- someone in California who appears not to have the usual risk factors of having traveled abroad or being exposed to another patient.

In South Korea, where 334 new cases of the virus were reported, the Kospi dropped 1.1% to 2,054.89. The central bank downgraded its growth estimate for 2020 to 2.1% from 2.3% and said the virus outbreak would have a short-term impact on business activity, after the economy expanded at its slowest pace in a decade last year. The Bank of Korea kept its key policy rate unchanged, at its current record low 1.25%.

The Shanghai Composite index rose 0.1% to 2,991.33, while shares fell in Taiwan and most of Southeast Asia. Thailand's benchmark rose 1.5% after tumbling 5.1% on Wednesday following reports of newly discovered virus cases.

Investors have been moving more money from stocks into bonds in the wake of the outbreak.