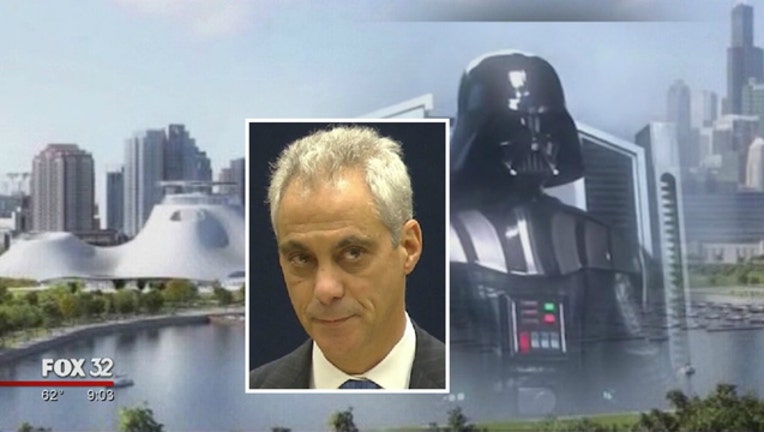 CHICAGO (Sun-Times Media Wire) - Mayor Rahm Emanuel tried Wednesday to isolate the Friends of the Parks, as city attorneys tried to do an end-run around a federal judge in a desperate attempt to keep movie mogul George Lucas’ museum in Chicago, the Chicago Sun-Times is reporting.

The mayor’s original plan to give Lucas 17 acres of lakefront land near Soldier Field has been embroiled in a Friends of the Parks lawsuit kept alive by a federal judge who sympathizes with the group’s central argument: that a 99-year lease “effectively surrenders control” of prime lakefront property to a museum that is “not for the benefit of the public,” but would “promote private and/or commercial interests.”

Emanuel shifted his focus to the site of McCormick Place East to avoid a protracted legal battle over the Soldier Field site and satisfy Lucas’ demand to get moving on the legacy project.

But now that Friends of the Parks has declared its intention to challenge both sites, and Lucas is “seriously pursuing locations outside Chicago,” Emanuel is attempting a last-ditch legal maneuver.

He’s asking the federal appeals court to order U.S. District Judge John Darrah to toss out the lawsuit, before Darrah has even had a chance to hear all the evidence. On Wednesday afternoon, the city said it filed a writ of mandamus with the federal appellate court.

It’s an extraordinary remedy, which faces high legal hurdles for success.Defendants recognize that the erroneous denial of a motion to dismiss is ordinarily insufficient to warrant mandamus relief. But this is no ordinary case. As noted above, this case involves a public project of enormous consequence to the City and its residents, and—absent mandamus relief—the district court’s denial of the motions to dismiss will kill the project. Only swift vindication of defendants’ clear and unequivocal right to dismissal will allow them to retain the Museum.

In its filing, the city notes that what it is asking is highly unusual: “Defendants recognize that the erroneous denial of a motion to dismiss is ordinarily insufficient to warrant mandamus relief. But this is no ordinary case. As noted above, this case involves a public project of enormous consequence to the city and its residents, and — absent mandamus relief — the district court’s denial of the motions to dismiss will kill the project. Only swift vindication of defendants’ clear and unequivocal right to dismissal will allow them to retain the museum.”

It’s a long-shot. But so was Emanuel’s back-up plan to tear down the above-ground portion of McCormick Place East and build the museum on a portion of the site that includes Arie Crown Theater. That plan would also areplace the lost convention space by building a $500 million McCormick Place expansion over Martin Luther King Drive.

The complex and controversial plan would have required Republican Gov. Bruce Rauner, Democratic legislative leaders and an Illinois General Assembly embroiled in a marathon budget stalemate to extend the life of five tourism taxes and authorize $1.2 billion in new borrowing for the Metropolitan Pier and Exposition Authority.

“It’s the only option left. We’ve got to. We don’t have time. They’re leaving unless we get a decision now. They’re not waiting. They have offers everywhere. This is the last and final” chance, said a source familiar with the delicate negotiations.

The legal end-run makes it clear why, hours before the court filing, Emanuel was back to talking about his original site near Soldier Field that triggered by the Friends of the Parks lawsuit.

“You have somebody willing to contribute nearly $1 billion to enrich this city culturally educationally and economically as part of a [museum] campus that we as a city collectively have envisioned,” the mayor said.

Lucas, his wife, Chicago businesswoman Mellody Hobson, all but threw in the towel after the latest roadblock put up by Friends of the Parks.

Hobson said she and Lucas were “now seriously pursuing locations outside of Chicago” after a two-year process that she claimed had been “co-opted and hijacked” from the outset by “a small special interest group.”

On Wednesday, Emanuel tried to isolate that group in hopes of pressuring Friends of the Parks to change its mind.

“I know what they did yesterday. When comments were made about a policy that was in contradiction to the filing and the stay of the court, they said, `Okay, we’re gonna start looking at Los Angeles and San Francisco,’” Emanuel said.

“I’m going to continue to work on this . . . The Lucas Museum is going to be built. The question to us is whether it’s going to be built in Chicago or L.A. I just want you to think about it. It’s gonna be built. The question is where? Where are those jobs gonna go — Los Angeles or Chicago? Where are those educational and cultural enrichments gonna go — Los Angeles, San Francisco or Chicago? I know where I’d like to see it. Right here.”

Friends of the Parks Executive Director Juanita Irizarry could not be reached for comment.

Earlier this week, she acknowledged that by declaring its opposition to the McCormick Place site, Friends of the Parks may well be putting the “final nail” in Emanuel’s hopes of keeping the Lucas Museum in Chicago.

But she refused to wear the political jacket for it.

“The vision to put the Lucas Museum on the lakefront in the first place is what ultimately killed this deal. They should have fought for a legal site to begin with. It’s ultimately Mr. Lucas who wanted it his way or the highway,” Irizarry said.

“It would be too bad for Chicago to lose the Lucas museum, but that would demonstrate it’s not a commitment of George Lucas and [wife] Mellody Hobson to stay in Chicago . . . It ultimately lies in the lap of Mr. Lucas as to whether he’s willing to cooperate with the broader needs of Chicago and put it on another site. If he’s not, folks should ask Mr. Lucas, `Why not?’”

On Wednesday, Emanuel answered the question for Lucas. It happened after the mayor was asked why he didn’t pressure the movie mogul to accept an alternative site far from the museum campus — like the Pullman historic district or the site of the old U.S. Steel South Works.

“Like universities and like hospitals, you work with philanthropic donors on what they would like to see. I just can’t tell `em, `Go here.’ It’s their philanthropic contribution to the city, which is how museums and libraries and everybody works with people,” the mayor said.

“That is a parking lot. You have three other museums, Soldier Field and McCormick Place right there. So it’s not like it’s violating something that other buildings are not part of.”

If the legal Hail Mary fails and Lucas takes his prize to Los Angeles or San Francisco, Emanuel will have spent some of his diminished political capital on a failed project that had critics once again questioning his priorities.

But the mayor bristled at that narrative.