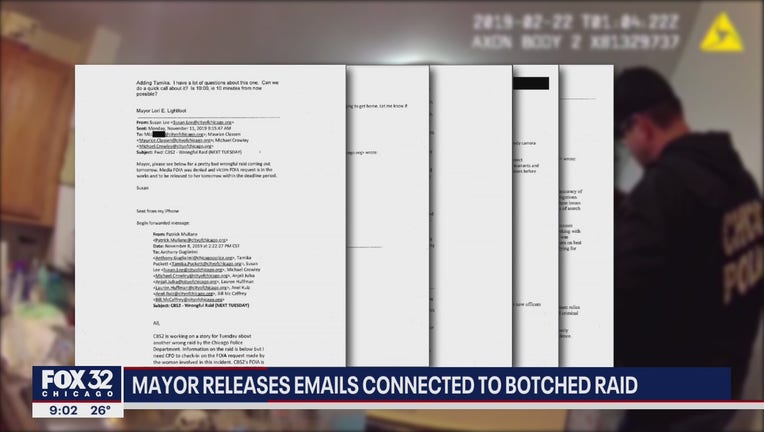 CHICAGO - The office of Mayor Lightfoot has released staff emails related to November 2019 responses regarding the search warrant execution at the home of a Chicago woman.

Young, 50, is a hospital social worker and was undressing for bed when a dozen Chicago police officers armed with a search warrant, smashed through her front door in February 2019.

The officers handcuffed Young, who was naked and terrified, as they searched her home for a suspect, who actually lived several houses away.

"Police officers yelling at me, pointing guns at me, making me stand in front of them naked, putting handcuffs on me while I was naked, no one should have to experience that," said Young.

The office of Mayor Lightfoot has released staff emails related to November 2019 responses regarding the search warrant execution at the home of a Chicago woman.&nbsp;

Mayor Lightfoot initially tried to distance herself from the incident by saying it happened before she took office in May 2019. But her administration tried unsuccessfully in court to block a local TV station from airing footage of the botched raid, which Young obtained through her lawsuit with the city.

Young was denied access to the video in a November 2019 Freedom of Information Act request to the city. The city also tried to have Young sanctioned for apparently breaking a confidentiality agreement.

Later, Lightfoot apologized and said Young shouldn’t be punished and vowed to make changes in the department on the warrant process and use the video to train officers on what not to do.

According to emails released on Wednesday, a top aide sent Lightfoot a summary of what happened on Nov. 11, 2019, explaining how Young was left handcuffed and naked for 40 minutes while police officers searched her home.

The aide also notes that Young had been asking for body camera footage. Lightfoot responded 30 minutes later, asking the aide to call her to talk about the situation.

RELATED: Chicago cops in botched raid had prior complaints: report

This month, the mayor initially told the media she did not learn about the raid until seeing it on the news. She then acknowledged that in fact was not true.

The mayor was supposed to meet with young Wednesday, but Young's attorney called it off after the mayor refused to hold a public forum on the raid.

According to Mayor Lightfoot's office, staff did not give her a detailed briefing of the circumstances involving Young, nor was she informed or involved in the denial of Young's FOIA request for video footage related to the raid of her home.

Lightfoot's office also said the emails released Wednesday are not "exhaustive or comprehensive of a full review of all emails surrounding the raid on Ms. Young’s home."

In addition to the initial production of emails, the Mayor's office also released:

All additional documents can be found here.