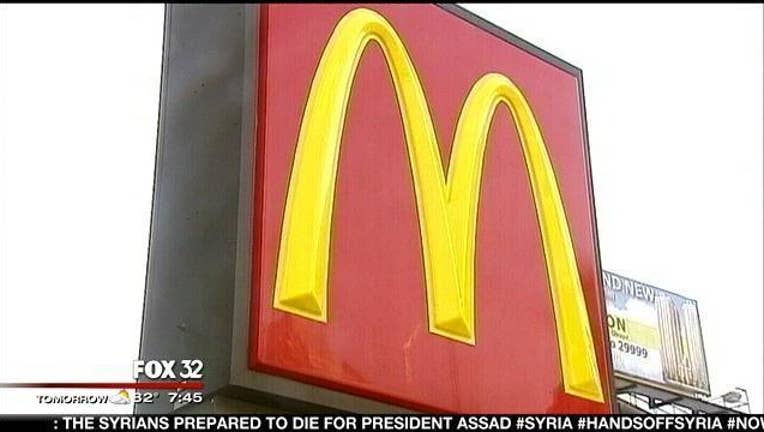 (AP) - McDonald's says fewer people are picking soda for Happy Meals after it stopped listing the drinks as an option on its menu boards.

The world's biggest hamburger chain said Thursday 48 percent of Happy Meals orders chose soda as a beverage in the U.S. after it was scrubbed from menus and marketing materials between July of last year and May. That's down from 56 percent in the year-ago period.

"I would expect that this would continue to go down," said Julia Braun, director of nutrition at McDonald's.

The results were noted in a report commissioned by McDonald's Corp. to track its progress on a pledge made in late 2013 with the Alliance for a Healthier Generation, which was founded by the Clinton Foundation and the American Heart Association.

The pledge is part of a push by McDonald's to quiet critics who say it serves junk food and peddles unhealthy choices to children. Shaking that reputation is particularly important for McDonald's, whose courtship of parents and children over the decades helped make it an industry leader.

Burger King and Wendy's have also said they would stop featuring sodas as an option for kids' meals on menu boards after advocacy groups called for the change. Representatives for both chains declined to provide details on how the moves have changed soda sales.

Margo Wootan, director of nutrition policy at the Center for Science in the Public Interest, said the decline in sodas for Happy Meals showed promise.

"It takes more than one year to undo decades of bad marketing," she said.

McDonald's did not provide historical data on the share of Happy Meals orders that included soda in past years, which might indicate the popularity of the drink had been fading on its own. But prior to the change, it said the percentage of Happy Meals with soda had been holding steady for at least 18 months.

Coca-Cola said in a statement that it is proud to be McDonald's partner, and noted that it supplies a range of drinks for the chain's customers, including Dasani water and Minute Maid juices for Happy Meals.

As for changing the drinking habits of adults, McDonald's doesn't plan to stop featuring Coke drinks for its extra value meals. But as part of its pledge with the Alliance for a Healthier Generation, it said it would offer side salads, vegetables or fruit as an alternative to fries in 20 major markets by 2020.

That effort didn't begin in the U.S. until earlier this year, and McDonald's says it doesn't yet have data on how many people are forgoing fries for salads, which now include kale and spinach.

The report commissioned by McDonald's also found the company complied with its pledge in the U.S. to promote healthier options on Happy Meal packaging and to include positive nutrition messages in advertising aimed at children.

The report, conducted by Keybridge, was based on surveys of 100 restaurants in the U.S. and 81 locations in Italy. Brendan Fitzpatrick, one of its authors, said Keybridge verified sales data on Happy Meal drinks with a McDonald's supply chain manager.

"Other than that, we're reliant on McDonald's for providing the data," he said.

Despite a variety of efforts by McDonald's to change perceptions about its food, sales have continued to slump since late 2012. And at least one effort to get people to eat better isn't working out.

When rolling out egg whites as an option for breakfast sandwiches in 2013, McDonald's started using whole grain muffins for its Egg McMuffins. But Braun, the director of nutrition at McDonald's, said feedback on the bread hasn't been good.

"I think that one is going to be reworked," Braun said. "Whole grains are definitely challenging."