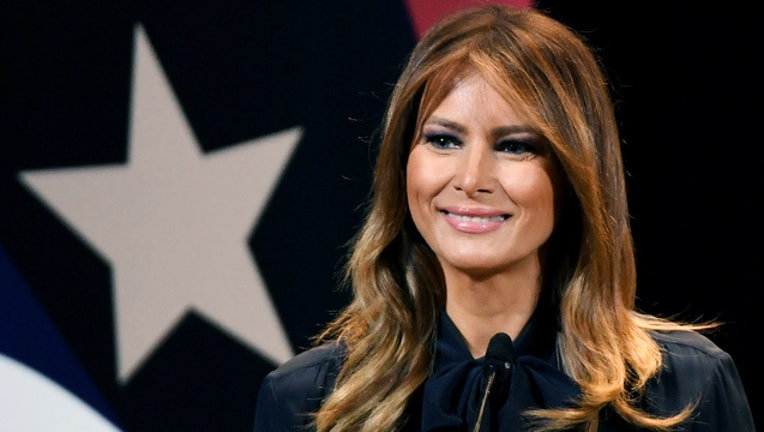 First lady Melania Trump speaks during a town hall meeting on the opioid crisis as part of her "Be Best" initiative at the Westgate Las Vegas Resort & Casino on March 5, 2019 in Las Vegas, Nevada. (Photo by Ethan Miller/Getty Images)

WASHINGTON (AP) - Melania Trump says she's ready to serve another four years as first lady if her husband is re-elected.

The first lady revealed her intentions during a question-and-answer period with students at Albritton Middle School at Fort Bragg, North Carolina. She traveled there with Karen Pence, Vice President Mike Pence's wife, to tour the installation and meet students as part of their shared focus on military families.

When a student asked if they wanted to serve again, they said they would.

"I think our husbands are doing (a) fantastic job and I will support my husband if he decided to run again," Mrs. Trump said. "And yes, it's a privilege, a great honor to serve and I will be here." Trump announced a re-election bid during his first year in office.

Mrs. Pence echoed the first lady. She noted that she is not elected or appointed, but is where she is "because I'm married to Mike Pence."

"What a privilege and honor to be able to go on this journey and it would be a privilege to continue as well," said Mrs. Pence, whose son is a Marine.

Asked how their new positions had changed their lives, Mrs. Trump talked about moving from New York and taking on different responsibilities. "But I would not change (it) for anything. I love what I do ... I will always shine a light on children and (the) next generation."

Mrs. Pence said one of the biggest changes for her and her husband "is the fact that we don't drive anymore ... somebody takes us everywhere."