In a rare event, a woman in Texas gave birth to one of her twin daughters while she was still pregnant with the other.

"Gabby was the first one born at 24 weeks and four days, and Bella was born at 25 weeks, exactly," Martinez told Fox News Digital in a phone interview.

Martinez recalled showing signs of early labor a week before the baby girls were born, but she was able to delay the birth for a few days, so they’d be able to develop more. 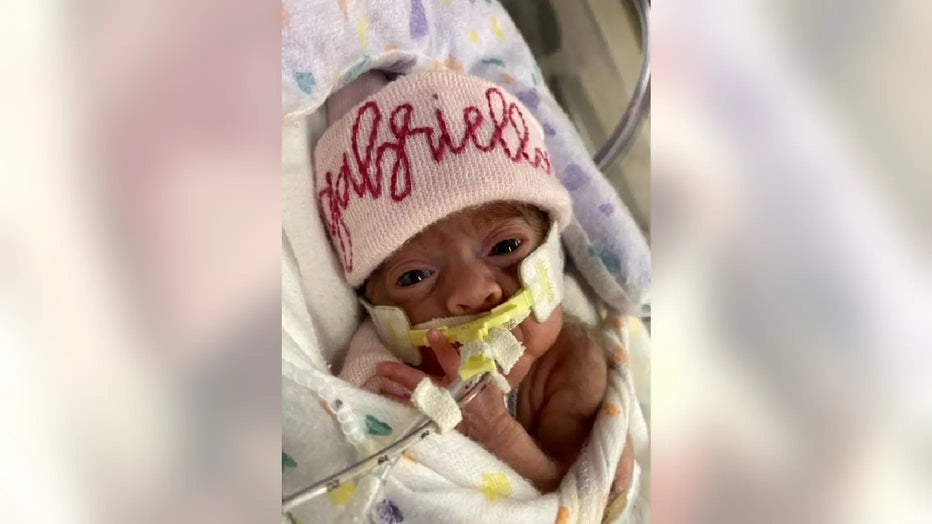 Gabriella Grace Hernandez was born on March 7, 2022, at Hendrick Health, a medical facility in Abilene, Texas. She was born premature at 24 weeks and four days. (Carmen Martinez)

"[My doctors] checked everything, and they were still there fine," Martinez said.

"I’ve only seen this one other time in my career."

Gabby was born weighing less than two pounds and had to be admitted to the hospital’s NICU.

Martinez said she was advised to delay the birth of her second baby to increase her chance of survival. She said she remained in labor without pain medication, was monitored really well and was given magnesium, which may help to slow or stop labor contractions, according to March of Dimes. "I held Gabby in for a week before I delivered her naturally."

Martinez, her boyfriend Johnny Hernandez and her 15-year-old son Ethan were shocked at the turn of events.

"We didn't call anybody immediately because we didn't know what was going to happen," Martinez told Fox News Digital.

"When we finally called our immediate family and sent a picture of Gabby, everybody was scared because all they saw was a picture of one baby — and they didn't know what to ask," she continued.

Members of the Martinez and Hernandez family were baffled to hear that the delivery of Bella was still in progress.

In the days leading up to Bella’s birth, Martinez said she could feel the infant moving around while she rested in her hospital bed.

"Bella was having her own party," she recalled. "It's kind of like she had the whole belly to herself, and she was having a good time." 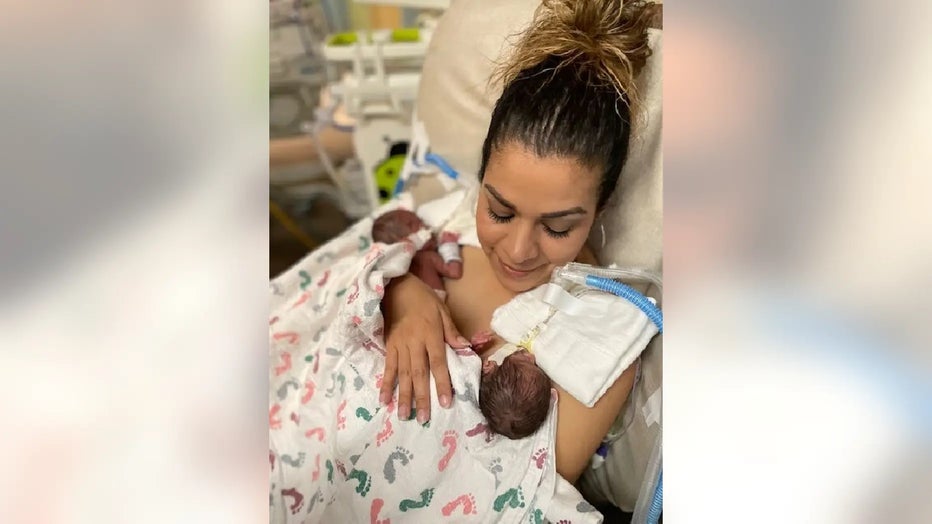 Carmen Martinez was able to hold both of her twin girls, Gabby and Bella, after the younger twin was safely delivered on March 10, 2022, at Hendrick Health. (Carmen Martinez)

Bella was born on Hernandez’s 37th birthday at one pound, eight ounces.

"I’ve only seen this one other time in my career. It’s very uncommon," Tadvick told Fox News Digital, in an email.

Both infants are receiving special care in Abilene while Martinez has returned home and resumed work in Winters, a city in the Runnels County of Texas, which is about 45 minutes away by car.

"We're just ready for them to come home."

Martinez said the separation has been hard on her emotionally, as was the necessary home prep to welcome two newborns into the family three months early — but she’s grateful that her twins are doing better.

"Gabby and Bella were given a 30% chance of survival for being so small and so early," she said.

"They're almost three months [old] now. They're doing good. Gabby's weighing four pounds, 11 ounces now, and Bella [is] four pounds, eight ounces. So, that's a big jump from being a pound and a half at birth."

Carmen Martinez and Johnny Hernandez weren't sure they should tell their family and friends about their twins' unusual birth. (Carmen Martinez)

The twins will remain in the NICU for "a little while longer," so that they can "get stronger and develop their lungs," Martinez said.

She added, "We're just ready for them to come home."

Martinez said she chose to wait a few months to share her story because she wanted to focus on the new babies' health.

Martinez said she hopes her story will help others while also raising awareness about the possibility of delayed births in multiple pregnancies.

Mothers of twins have been reaching out to Martinez to ask her about her experience.

She said she hopes her coming forward will help others while raising awareness about the possibility of delayed births with multiple pregnancies.

Earlier in the year, another mother went viral for giving birth to twins who were born 15 minutes apart on New Year’s Eve and ended up having birthdays in different years.

The hospital calculated that the birth was a one in two million chance. 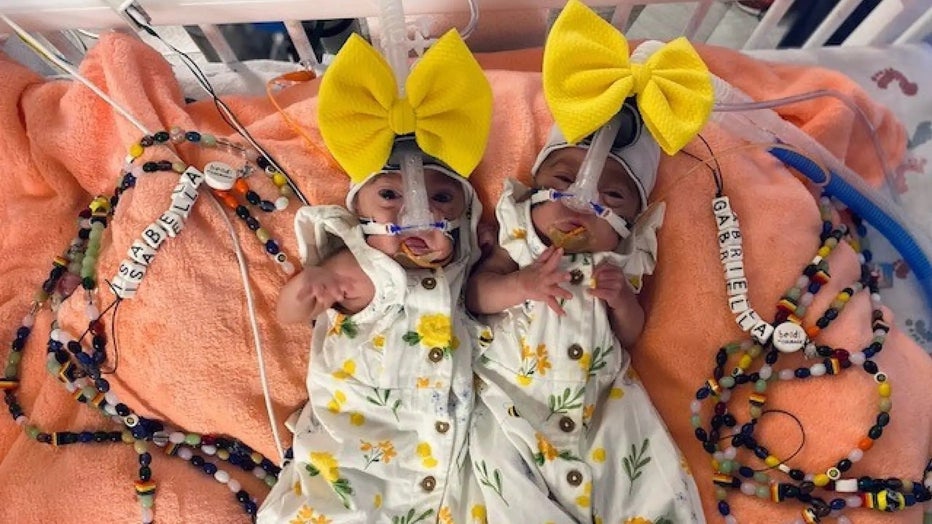 At the time of publication, data and calculations on the probability of giving birth to identical twins in a span of three days were not readily available.

"Our doctors said there was a 30% chance they could be identical," Martinez told Fox News Digital.

"They ended up being identical."

And with two March birthdays to think about for the twins, Martinez already has a plan drawn up for the future.

"We'll celebrate their birthdays together while they're young and don't understand. But, once they get older and understand, then they're going to want their own birthday parties on their day," said the proud mom.