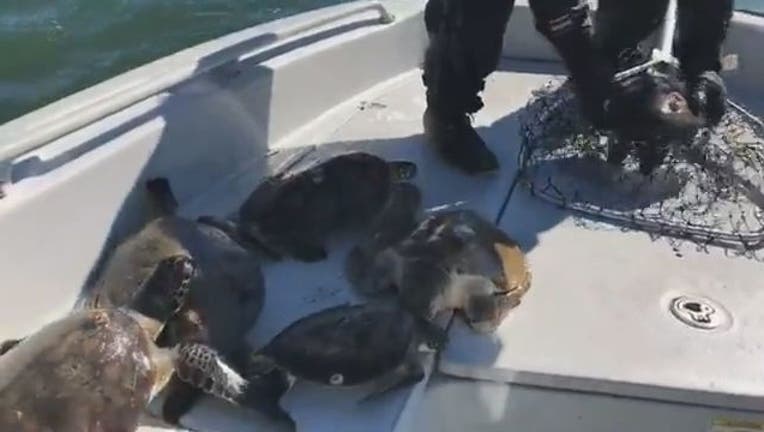 TAMPA, Fla. (AP) -- More than 1,000 sea turtles stunned by unusually cold weather have been rescued from waters off Florida's Panhandle this month.

"It's now over 1,000, maybe up to 1,100," she told the Tampa Bay Times, referencing the number of turtles that had been collected so far from the bay.

Lamont says many of the stunned animals are juvenile green turtles, along with some Kemp's ridleys, one hawksbill and a few loggerheads. Kemp's and hawksbills are listed as endangered species.

The reptiles are cold-blooded, which means they slow down when it gets cold. But when temperatures drop below 50 degrees the turtles become unable to swim or lift their heads above the water to breathe, and can drown.

So volunteers pluck the turtles from the water or shore, and send them to Gulf World Marine Park for rehabilitation.

This isn't the first winter that hundreds of the turtles needed help. In 2010-11 about 1,700 of the reptiles were rescued during a long cold snap, and 400 died after washing ashore.

This year, volunteers are heading into the water to try and get to the turtles earlier.

"It's really tough," Lamont told the paper. "And it's really inspiring to see that people are willing to do it to save these