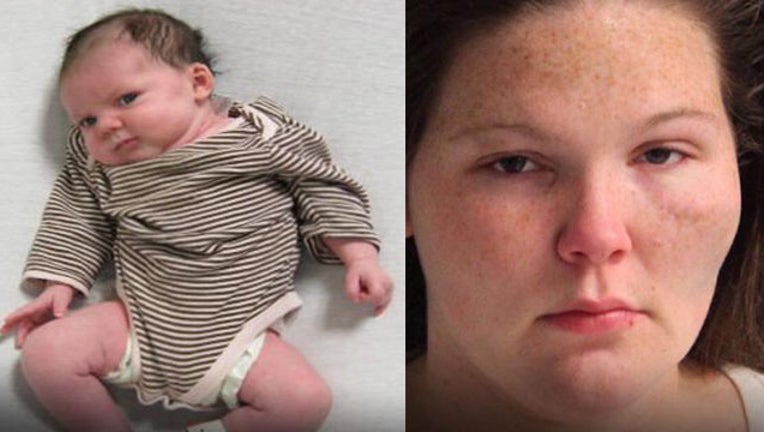 FOX 5 News (WTTG) -- A 2 to 3-month-old baby girl was discovered in a car carrier on the side of a Maryland road late Saturday night, and Anne Arundel County police have charged her mother with child neglect and reckless endangerment.

They say the baby was found just before midnight by a neighbor who lives along Druid Hill Avenue in Pasadena. The child was in a car seat carrier, and she was in good condition, according to police. The neighbor who found her contacted authorities.  The baby was taken to a local hospital by EMS, and was released into the care of Child Protective Services while police searched for her parents.

The Anne Arundel County Police Department shared the baby girl's photo on their social media pages in hopes of finding someone who knew her or her parents. In a news conference late Sunday morning, police said a woman had come forward identifying herself as the child's mother. Late Sunday afternoon, Anne Arundel County Police said that the woman, Sandra Clary McClary, is indeed the baby's mother.

Detectives say scuff marks on the carrier, and other debris in the roadway, indicate that it may have fallen off of a moving car, however, they haven't been able to confirm that information . Along with the baby and the carrier, a diaper bag and some other belongings were also found.

During the investigation, officers obtained a partial tag of a vehicle located in the area where the child was located. While questioning McClary, detectives were able to determine that she was in the 900 block of Druid Hill Avenue, where she took the child from her vehicle and left her on the side of the road. That vehicle's registration matched that of the partial tag of the vehicle officers established had left the area around the time this incident occurred.

After sharing the results of the investigation with the Anne Arundel County State's Attorney's Office, McClary was charged with child neglect and reckless endangerment.

The child is in the care of Social Services.