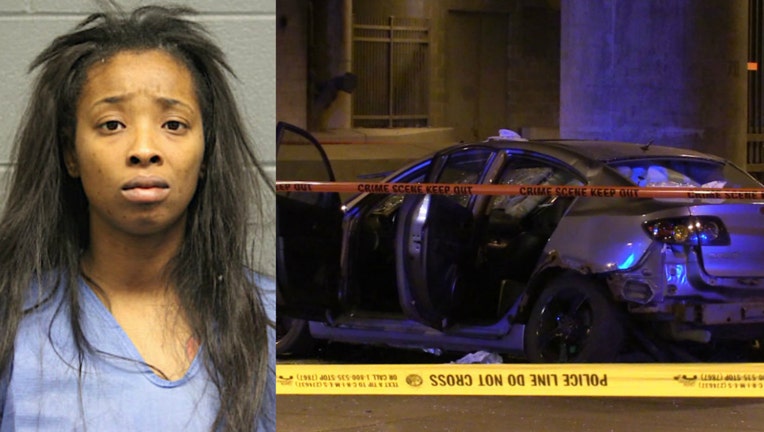 CHICAGO - A mother has been sentenced to 3 years in prison for causing a crash that killed her 1-year-old child on Lower Wacker Drive a year ago.

Adreannia Donaldson was allegedly driving while high and drunk on Jan. 11, 2019, when she crashed into an oncoming vehicle near Garvey Court, Cook County prosecutors have said.

Her child, 23-month-old Amaria Glenn, was ejected from the car and killed, authorities said. The child was wearing a seat belt, but was not in a car seat.

Donaldson was sentenced on Tuesday to 3 years in prison by Judge William Gamboney, according to court records. She was given credit for already serving 360 days in prison. She must serve 85% of her sentence.

Donaldson had pleaded guilty to a felony count of aggravated DUI, according to court records.

The night of the crash, Donaldson had been hanging out with her boyfriend and ingesting marijuana before leaving to get something to eat at Subway, prosecutors have said.

She crashed after failing to yield at a left turn, and nearby witnesses rushed to her vehicle and found her passed out in the driver’s seat.

Donaldson was taken to a hospital, where tests showed she had cocaine, marijuana and amphetamines in her system, prosecutors said. Donaldson also had a blood-alcohol level of .083, slightly above the legal limit.

The Illinois Department of Child and Family Service had investigated Donaldson the January before the crash, but the allegations were determined to be unfounded.