In areas with minimal or moderate spread, the CDC recommends social distancing, masks and increased sanitation.

ITASCA, Ill. - Nearly 100,000 children in the United States tested positive for the novel coronavirus during the final two weeks of July, according to a new report from the American Academy of Pediatrics and the Children’s Hospital Association.

The report said that 97,078 new child cases of COVID-19 were reported between July 16-30, which marked a 40% increase in known new child cases in the U.S. within that time frame. About 7 in 10 of those new cases were reported in states across the South and West, regions that experienced a sharp spike in new cases during the months of June and July following decisions to reopen bars and other businesses. 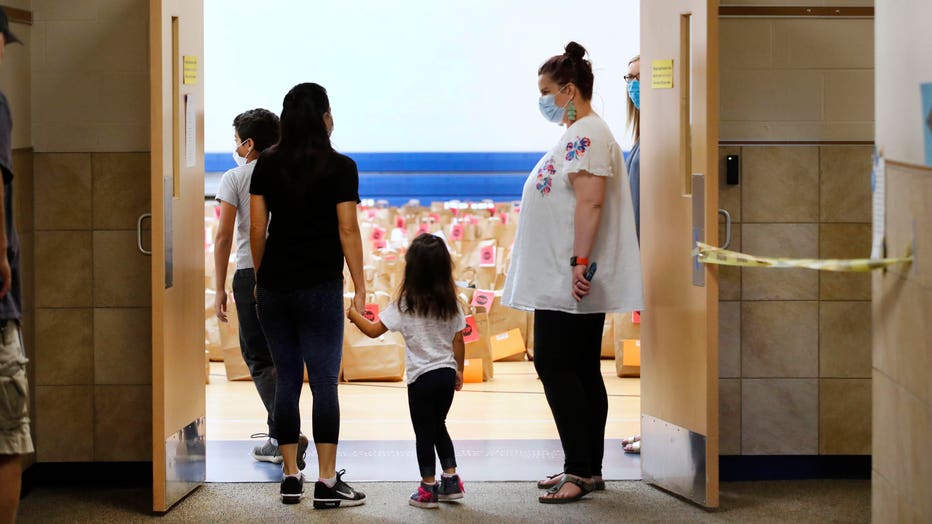 A file image shows a parent and her children picking up personal belongings at Freedom Preparatory Academy on May 18, 2020 in Provo, Utah. (Photo by George Frey/Getty Images)

As of July 30, there were nearly 339,000 total child COVID-19 cases reported in the U.S., which represented only 8.8% of the total number of cases nationally, according to the report. At least 86 children have died from COVID-19 since May.

Studies suggest that young children don’t spread the virus as much as adults, while kids aged 10 and up may transmit it as easily as adults. Children are also considered less likely to have serious symptoms. But experts say more conclusive proof is needed on what role children play in the pandemic.

The report comes amid ongoing questions and discussion among parents and education officials on whether to reopen schools, which were largely closed in the spring to help curb the spread of the virus.

RELATED: US surpasses 5 million COVID-19 cases, according to Johns Hopkins

The Trump administration has pushed for schools to fully reopen with in-person instruction, while some public health experts and educators have voiced concerns over the ability for districts to handle potential outbreaks. Many have also noted the risk that reopening amid the pandemic poses risks for teachers and other school staff.

Three Arizona summer school teachers who followed CDC guidelines while teaching in the same classroom recently contracted the virus, and one of them died.

Across the country, cities have implemented a patchwork of open and closed classroom plans in attempts to prevent the spread of COVID-19. Chicago, Los Angeles, Miami and Houston all announced they would start the school year with students learning remotely. But plenty of other districts are planning to welcome students back into the classroom with new health protocols in place.

Meanwhile, teachers unions are demanding clearer health protocols, saying that school buildings should reopen only in areas with lower virus rates. One of the nation’s largest teachers union said it would authorize its members to strike if their schools plan to reopen without proper safety measures — such as masks, updated ventilation systems and physical distancing.

The U.S. leads the world in confirmed virus cases, with more than 5 million, and has recorded 163,100 deaths, according to data compiled Aug. 10 by Johns Hopkins.