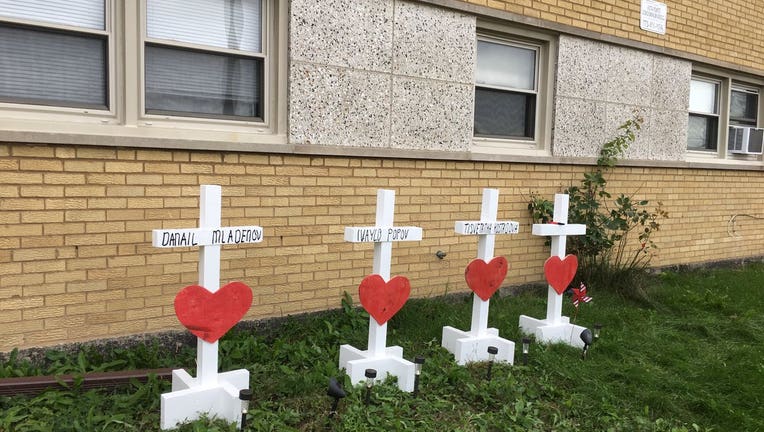 Five people were shot and killed on the Northwest Side, allegedly by a neighbor.

CHICAGO - Police are continuing to question a 67 year old man, less than 24 hours after a shooting rampage at a condominium complex on the Northwest Side, but so far, no charges have been filed.

Outside the homes where the gruesome scene had unfolded in the 6700 block of West Irving Park Road, someone set out four wooden crosses to honor the lives lost. But Sunday afternoon, more heartbreak when the fifth and final victim who’d been shot Saturday succumbed to her injuries.

Outside that woman’s apartment on the third floor less than 24 hours after the shooting rampage, the pain is unimaginable for one young man who just learned his mother died at Lutheran General Hospital. Neighbors say his mother died a hero. When the gunman entered their apartment, she said something, prompting her son to run for his life out the back door.

“I guess he just kept walking from home to home, keep knocking on the doors and hoping someone’s gonna open the door. Why he was doing that, no one knows,” said Raf Smith, former resident of the building.

Raf Smith used to live right next door to this third floor unit near Irving Park and Oak Park. He and others who presently live here say they can’t understand why their neighbor, a 67 year old retired construction worker, now in police custody, would snap.

Police returned to the scene of the crime a day later, looking for answers. The gunman is also accused of shooting an entire family of four as they sat down to dinner together in their second floor condo. Neighbors tell us in recent years, the man had become angry and aggressive, and they told police of numerous incidents.

“And those prior incidents involve anything from making too much noise to exchanging dirty looks to bumping into each other on the stairwell. So we know there’s a lot of history between him and the people of the other apartments,” said Chicago Police First Deputy Superintendent Anthony Riccio.

One neighbor told us he’d even spit on your shoes as you walked by for no apparent reason.

Police have still not come out with a conclusive motive for the shooting.