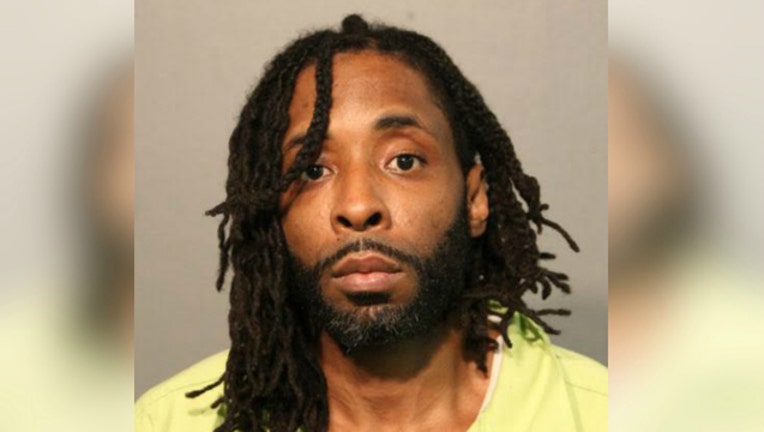 The Rockford man also confessed to another person that he had “f—– up” and “something terrible happened” just days before the boy’s body parts — including his head — inside a plastic bag attached to barbell weights turned up in the water over Labor Day weekend last year, Assistant State’s Attorney Jamie Santini said.

Harris was allegedly under the impression that if body was found without the head, Kyrian couldn’t be identified. He also figured the severed body parts would decompose, making if difficult to extract fingerprints, the Chicago Sun-Times is reporting.

Though it took more than a year to arrest Harris for murder, concealment of a homicidal death and dismembering a human body, forensic tests confirmed that the DNA evidence from the remains  matched those of Kyrian, authorities said.

While Santini didn’t provide further explanation as to how the boy was killed in late August 2015, he said Harris wrapped Kyrian’s lifeless body, placed it in the backseat of a borrowed Chevy Camaro and drove to Chicago where he cut it up and disposed of it.

Harris allegedly killed the lactose-intolerant boy because he wouldn’t stop crying after he was given milk.

He then had family members threaten potential witnesses, Santini said.

Judge Maria Kuriakos Ciesil said Harris was a “danger to himself and society” before ordering him held without bail.

Harris, 41, had promised to watch Kyrian and his 2-year-old grandson as Kyrian’s mother and Harris’ daughter moved their families to Iowa, Santini said.

He accompanied the women to the store to buy things he’d need for the boys on Aug. 19, 2015, Santini said.

The women went to Chicago for two days before returning to Rockford to finalize their efforts to get public aid so Harris could watch Kyrian, Santini said.

When Harris later told a witness he killed Kyrian, he complained that he was not getting paid enough to babysit Kyrian in the Rockford house he shared with his son, his girlfriend and her two sons, Santini said.

By September 2015, Harris was getting harder to reach. Kyrian’s mother and Harris’ daughter would call and text to check up on their sons but soon, Harris wasn’t responding to Kyrian’s mother’s texts, Santini said.

After his daughter finally got a hold of him to tell him she and Kyrian’s mother would be coming on the weekend of Sept. 12 or Sept. 19 to pick up the boys, Harris stopped answering both women’s calls and texts, Santini said.

By Sept 5, Kyrian’s severed hands, feet and head were found in the West Side lagoon along with several weights with plastic bags knotted through the center. But investigators didn’t know they were Kyrian’s remains at the time.

Less than two weeks later, on Sept. 17, Kyrian’s mother called Harris’ girlfriend and asked her about her son’s whereabouts. She was told Harris would call her back, Santini said.

That same day, Harris called Rockford police and reported Kyrian missing. He allegedly told authorities he turned Kyrian over to people he thought were Kyrian’s mother’s friends and had not seen the toddler since, Santini said.

Meanwhile, investigators learned that Kyrian had not been seen at Harris’ residence since the last weekend of August 2015, Santini said.

Around that time, a friend said Harris borrowed a Camaro to drive to Chicago. The Camaro was caught on an IPass camera shortly after 6 p.m. on Aug. 31, 2015, Santini said.

Harris had been in custody in Winnebago County for a pending aggravated battery case against a Department of Children and Family Services worker, Santini said.

Harris lived in Chicago until 2005 when he moved to Iowa where he worked at a temp agency, according to Assistant Public Defender Kevin Ochalla said.

Harris then moved to Rockford in 2011 where he was enrolled in trade school for hair design, Ochalla said.