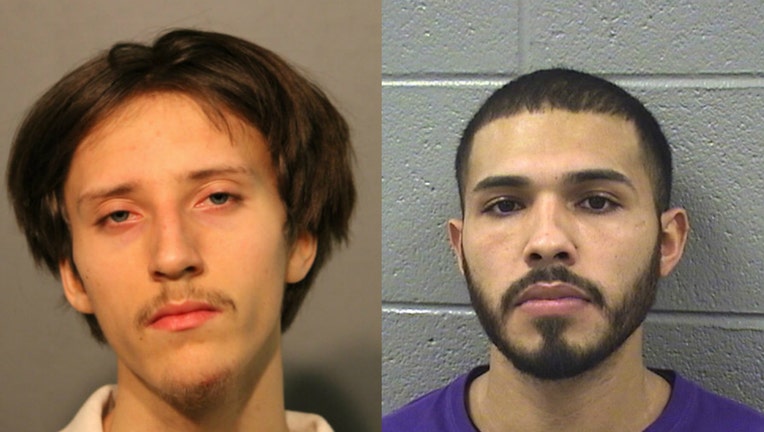 CHICAGO - Two men were denied bail after the pair and a juvenile were charged in connection to an armed carjacking of a ride-share vehicle over the weekend in Belmont Central.

Moses Aponte, 19, and a 17-year-old boy allegedly stole the vehicle at gunpoint Dec. 8 before crashing it — sending two of the ride-share passengers to a hospital — and firing gunshots, Chicago police said.

Another man, 26-year-old Fabian Alonzo, is charged with criminal trespass to a vehicle in the same incident, police said.

Alonzo and Aponte were both ordered held without bail, according to court records.

A 34-year-old ride-hailing driver had just dropped off one of his three passengers at 11:47 p.m. when two males approached him in the 6300 block of West Belmont Avenue and took his Toyota Sienna at gunpoint, according to police.

The Sienna crashed minutes later into two parked cars in the 2400 block of North Lamon Avenue, police said. The two other passengers in the van were taken to Illinois Masonic Medical Center with injuries that were not life-threatening, and two others were arrested.

The juvenile fired gunshots after the crash, but no one was hit, according to police.

Aponte, of Humboldt Park, faces a felony count of vehicular hijacking with a firearm, police said.

Alonzo, of Belmont Central, faces two misdemeanor counts of trespass to a vehicle and obstructing identification, police said. He was also wanted on two warrants, and one out-of-state warrant.

The teen is charged with two felony counts of vehicular highjacking with a firearm and reckless discharge of a firearm, and a misdemeanor charge of trespass to a vehicle, police said. His name was not released.