Marisabel Figueroa was told her daughter Kaitlyn — who was diagnosed with autism at 3 years old — would never be able to communicate. And Kaitlyn never uttered a word until this year.

MULBERRY, Fla. - Marisabel Figueroa was told her daughter Kaitlyn — who was diagnosed with autism at 3 years old — would never be able to communicate. And Kaitlyn never uttered a word until this year, when her neighbor’s Christmas lights spectacle had such a profound impact on Kaitlyn that it brought Figueroa to tears.

Every year for the past 10 years, Figueroa has taken Kaitlyn to their neighbor Don Weaver’s house. Weaver puts on a spectacular Christmas lights display, which includes holiday music and a guest visit from Santa Claus that has always put a smile on Kaitlyn’s face.

All those years, Kaitlyn communicated with mostly non-verbal cues as her mother worked to find ways to adjust her to things that might normally be triggering for children with autism.

While Figueroa had heard that lights and music would be something that could potentially trigger anxiety for her daughter, she said Kaitlyn immediately fell in love with the lights put up at the Weaver household. 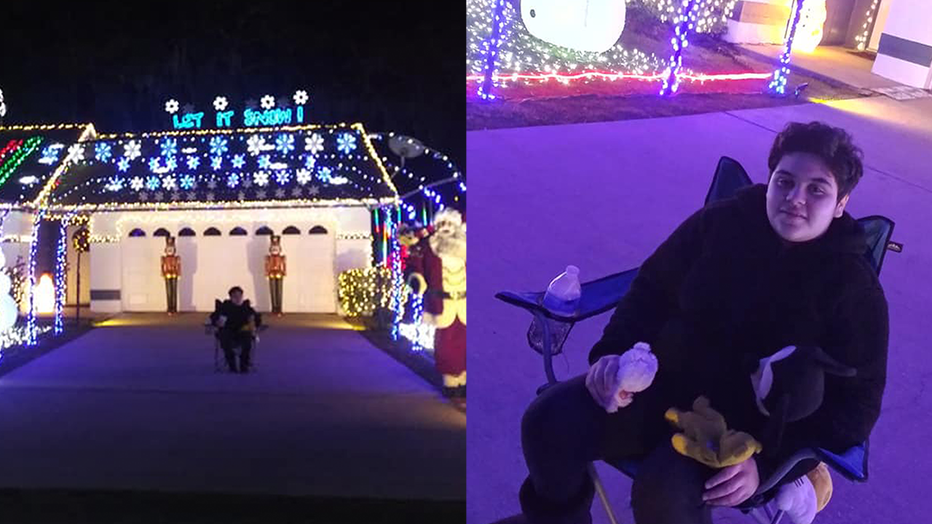 Kaitlyn has been visiting Don Weaver's Christmas lights display for the past 10 years.

“I made it a tradition for Kaitlyn to go and she loved it, the first day she went she loved it, and she was basically raised on those songs,” Figueroa said.

She added that when Thanksgiving rolls around, Kaitlyn is already ready to see the lights that always brought her joy since she was a child.

“Finally, after 10 years of going to see the house, and so many years of looking at the lights and more lights being added on and bigger crowds and just more movement, Kaitlyn finally came out and started pointing out stuff that was lighting up,” Figueroa said.

She said Kaitlyn began to jump for joy, singing her favorite song, “Santa Claus is coming to town!”

“I immediately got emotional because I’ve never heard my daughter just come out like that unprompted,” Figueroa said. “It shocked me to the point where I just burst out in tears.”

Figueroa said she was absolutely fascinated to hear her daughter’s voice and because of that, she said, Christmas came early.

“I was so hysterical, it was me who had problems speaking that day,” said Figueroa.

Ever since then, Figueroa said her daughter has been significantly more verbal. Figueroa said Kaitlyn is now “talking up a storm.”