We are now hearing one incredible survivor's story. Trapped in her crushed car, a Fort Worth nurse went to incredible lengths to get out alive.

FORT WORTH, Texas - The mess of crashed cars has now been removed I-35W in Fort Worth where six people died in a massive pileup Thursday morning.

We are now hearing one incredible survivor's story. Trapped in her crushed car, a Fort Worth nurse went to incredible lengths to get out alive.

Rebecca Benson is just one of the many crash victims. She is still recovering from minor physical injuries and significant mental trauma.  While she recuperates, her husband shared her story of survival. 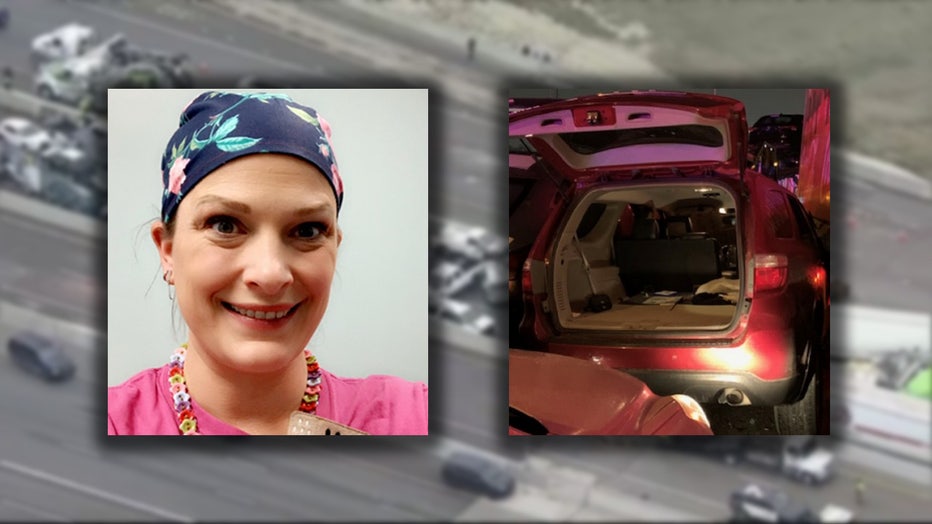 "Today, it’s the reality, the realization that I almost lost my whole world yesterday," he said. "I am so unbelievably proud of her. So proud. And so grateful. We’ve been married for over 18 years, and we have two kids, and we have a life."

Ryan’s wife, Rebecca, crawled out of the back of their Dodge Durango and walked away from the pileup scene without serious physical injuries.

Ryan explained how his wife survived just seconds after determining she was heading straight for two 18-wheelers crashing in front of her.

"When she started to slide and realized she couldn’t stop herself, she just thought two things: I’m going to go as limp as I can possibly be, relaxed as I can be, and aim the vehicle in the safest place it can go," Ryan explained.

Rebecca decided the safest place to crash was between two 18-wheelers.

"I told her I would not have chosen that because my mind would’ve thought I would’ve been pinned inside those 18 wheelers," Ryan said. "Well, this is the emergency medicine. This is her career kicking in."

Rebecca is no stranger to trauma. She’s a nurse at Cook Children’s Hospital with more than a decade’s experience. Before that, she drove an ambulance.

"Yesterday was probably the most helpless I’ve ever felt in my life because I couldn’t get to her," Ryan said. "Yesterday was full of fear and panic and anxiety."

Ryan was home when he got the first call from his wife at 6:17 a.m. Her first words were, "I’m okay, but there’s been an accident."

Meantime, a co-worker in the resulting traffic jam called Rebecca to warn her. She had no idea Rebecca had already crashed.

Although bruised and mentally drained, Rebecca connected with that co-worker and continued on to go work.

"She asked, ‘Where are y’all at?’ And he told her. And she just decided, ‘I’m walking,’" Ryan said. "She just started walking up northbound 35. She said she walked somewhere between a half mile and a mile, and it’s 25 degrees."

The Bensons say they're praying for families who lost loved ones.

Lawmakers looking for answers about deadly Fort Worth pileup