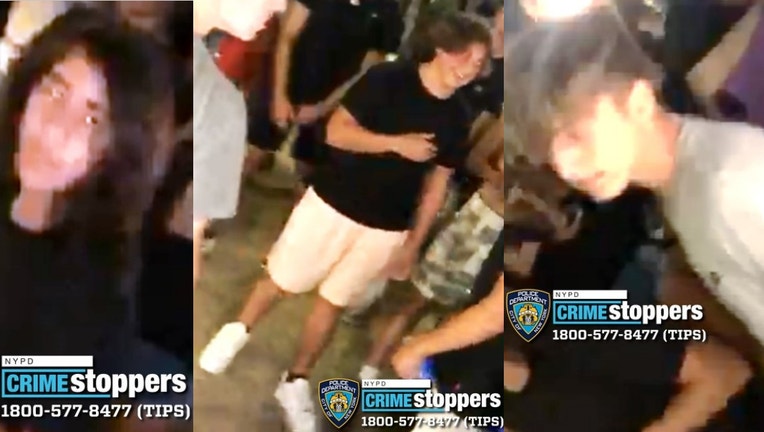 NEW YORK - The NYPD was asking for the public's help tracking down a trio of teens who attacked a man in Queens on Friday.

A 44-year-old man, was walking his dog near 75th Street and Juniper Boulevard North in Middle Village at around 9:55 p.m. when he saw a group of young people lighting fireworks, yelling, and screaming in the street.

The man approached the group and asked them to keep the noise down. They got into an argument. It quickly escalated and a group of teens viciously attacked the man, punching and kicking him before he was able to escape.

He suffered various cuts and bruises.

Police are seeking three male suspects in the attack. One is described as having a thin build with long dark hair and was last seen wearing a black t-shirt, shorts, and sneakers.

The second suspect is described as having a medium build with short, straight hair and was last seen wearing a black t-shirt, light-colored shorts, and white sneakers.

The third suspect is described as having a thin build with short, straight hair, and was seen wearing a gray t-shirt, Nike shorts, and white sneakers.

Anyone with information was asked to call the NYPD's Crime Stoppers Hotline at 1-800-577-TIPS (8477) or for Spanish, 1-888-57-PISTA (74782). The public can also submit their tips by logging onto the Crime Stoppers website at WWW.NYPDCRIMESTOPPERS.COM, or on Twitter @NYPDTips.