Four Chicago police officers have been credited with saving the life of a 15-year-old boy shot in the chest and back last week on the Southwest Side.

CHICAGO - Four Chicago police officers have been credited with saving the life of a 15-year-old boy shot in the chest and back last week on the Southwest Side.

The officers were honored Tuesday morning with the CPD Lifesaving Award in a ceremony at the 8th District Station in West Lawn, where the officers explained how they calmed down the boy and applied a life-saving chest bandage.

“I was talking to him through the whole ordeal,” Officer Saul Avila said at the award ceremony. “I was holding his hand, reassuring him … I wanted him to know, ‘We’re here for you.’”

The officers were on patrol on Nov. 19 when they responded to a person shot in the 7100 block of South Lawndale Avenue, according to police. 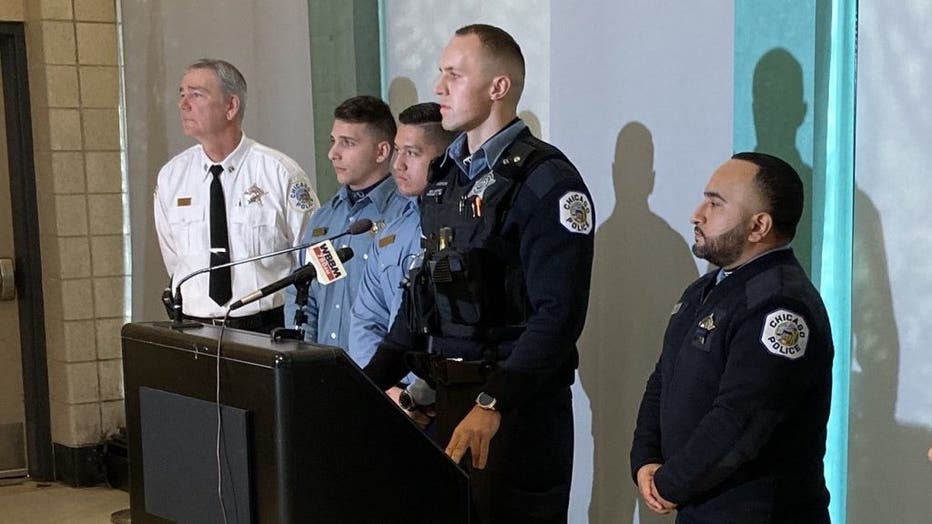 A teen was walking in that block about 12:43 a.m. when he heard gunfire and realized he was shot, police said. He had gunshot wounds in his chest and back.

The officers arrived and placed a chest seal on the boy to slow the bleeding, police

The boy was taken in serious condition to Christ Medical Center in Oak Lawn, and his condition was later stabilized, police said.

Officers Saul Avila, Juan Guerrero, Dawid Kasprzak and Ioannis Mitrogiannis were nominated for the award by their sergeant.

“This is why we joined the department: Because we want to help people and show there are good officers out here,” Guerrero said.