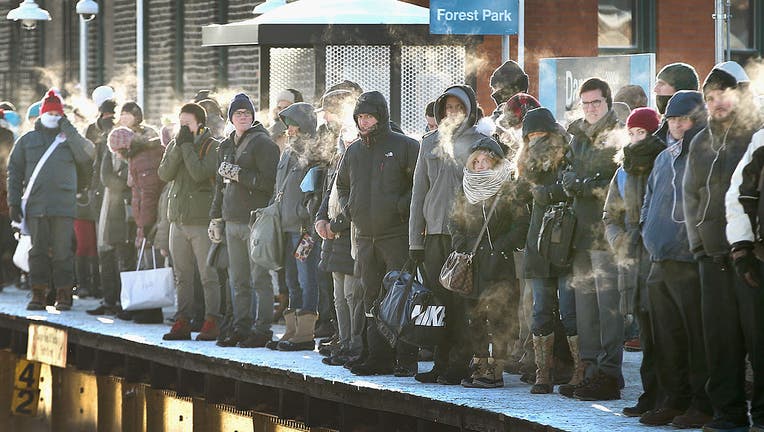 Passengers heading into downtown wait on an "L" platform for the train to arrive in below zero temperatures on January 7, 2014 in Chicago, Illinois. (Photo by Scott Olson/Getty Images)

America might reach herd immunity from the coronavirus sometime around May, according to a timeline laid out by Operation Warp Speed's top science adviser.

Dr. Moncef Slaoui spoke with Jake Tapper during Sunday’s “State of the Union,” addressing the timeline for delivering vaccines developed by Moderna and Pfizer – each of which is pending approval.

An advisory panel is meeting Dec. 10 to determine whether or not to approve the vaccines. Should the panel grant approval, Slaoui said that the government will move fast to deliver the vaccines across the country.

"Our plan is to be able to ship vaccines to the immunization sites within 24 hours from the approval, so I would expect maybe on day two after approval, on the 11th or 12th of December,” Slaoui said.

When asked how long it may take to reach herd immunity, which would potentially allow for a return to normalcy, Slaoui confirmed that Operation Warp Speed determined it could distribute up to 20 million immunizations a month starting in December.

“Normally, with the level of efficacy we have – 95% - then 70% or so of the population being immunized would allow true herd immunity to take place,” Slaoui said. “That is likely to happen somewhere in the month of May, something like that, based on our plans.”

Operation Warp Speed will take its cues from state health departments to determine where the vaccines should go and who will receive the immunizations first.

Slaoui said the Center for Disease Control and Advisory Committee on Immunization Practice would meet to issue guidance as to who states should prioritize for vaccinations, but the final decision would be up to each state.

“But clearly the highest-risk people, front-line workers, essential workers should be among the first,” Slaoui said.

The key, though, will be to shift public perceptions about the safety and effectiveness of the vaccines. A recent Gallup poll found that only about 58% of people trust the vaccine enough to take it.

“I really hope and look forward to seeing the level of negative perception people have about the vaccine decrease and positive perception increase,” Slaoui said. “Most people need to be immunized before we can return to a normal life.”

On ABC's "This Week," Slaoui confirmed that Operation Warp Speed has had no contact yet with anyone on the Biden transition team.

Talking with Chuck Todd on "Meet the Press," Slaoui stressed that Operation Warp Speed has been separate from "the political environment," and hopes that there is no disruption during the transition.

"As you know, I've been highly supportive of the program, and if it means I'll work with the new administration, I'll be very happy to."