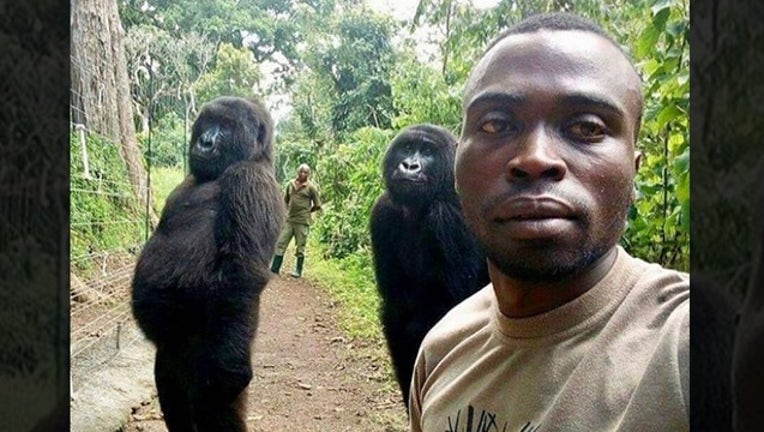 A photo posted by the Virunga National Park in Africa showing a pair of orphaned mountain gorillas striking a pose with two park rangers has gone viral.

The park tells Fox 35 that the photo was taken by caretaker Mathieu Shamavu.

The gorillas are seen standing upright in the photo between the two rangers, which the park says is real, despite some critics calling it a fake.

"We’ve received dozens of messages about the photo. YES, it’s real!" wrote the park on Instagram and Facebook. "Those gorilla gals are always acting cheeky so this was the perfect shot of their true personalities! Also, it’s no surprise to see these girls on their two feet either—most primates are comfortable walking upright (bipedalism) for short bursts of time."

In an interview with BBC News, the park's deputy director, Innocent Mburanumwe, said that the caretakers have looked after the gorillas since they were around 4-months-old and, over time, have learned to imitate them.

The park did note that the photo was taken under "exceptional circumstances" and that "it is never permitted to approach a gorilla in the wild."

If you would like to donate to help protect Africa's oldest National Park, visit virunga.org/donate.