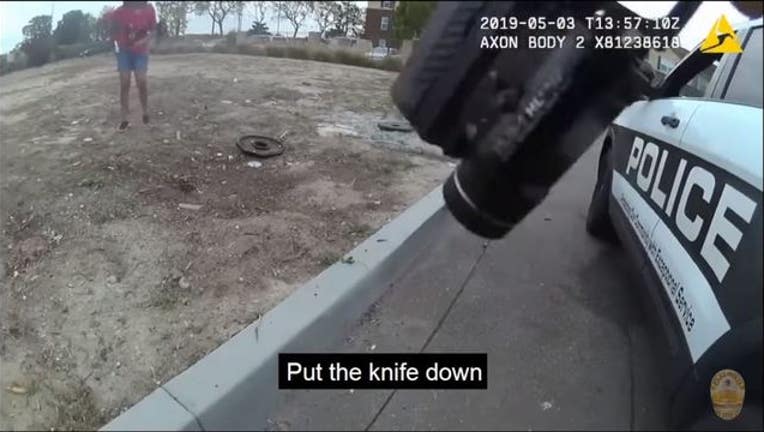 OXNARD, Calif. (FOX 11) - The Oxnard Police Department on Thursday released dramatic video of a confrontation between a police officer and an armed teen.

The incident occurred on May 3, 2019, in a parking lot located at 480 N. Rose Avenue in the city of Oxnard. Police had received a report of a young woman holding a knife that appeared "to be disturbed."

Oxnard police say the 911 caller contacted dispatch three more times, each time saying the young woman was "getting increasingly worse" and was screaming and threatening people. During the investigation, detectives determined those 911 calls were made from the phone in the teen's possession, according to the police department.

In the video, the first arriving officer, identified as Timothy Roberts, contacted the teen who was out in a field area. He asked the teen to come closer and asked why someone was calling saying she was waving a knife?

"Why? What happens if I reach for it?" answered the girl.

"Then something bad is going to happen," replied the officer.

At that moment in the video, the girl reached for her pocket and took out the gun as the officer took out his weapon.

The officer radios for backup while ordering the girl to drop the knife. The teen is seeing slowly walking towards the officer with brief pauses as the officer walks backward to create distance between the two.

"Come on, shoot me," the girl is heard saying on the video. "I've been waiting all day."

Eventually, another officer arrives and investigators say that while that officer is getting a "beanbag" shotgun, the teen rushes at Officer Roberts who fires his weapon hitting the girl at least three times.

Medical aid to the teen begins immediately by the officers on scene and eventually, paramedics are seen tending to the girl. The girl was rushed to the hospital where she is currently listed in critical but stable condition.

The investigation is ongoing. Officer Roberts has been placed on paid administrative leave, which the department says is standard procedure for officer-involved shootings. He has been employed with the Oxnard Police Department since 2015 and is assigned to the department's Patrol Division.

Police are asking anyone who may have witnessed the incident or has additional information on this case to contact Detective Jeff Kay at 805-385-8174.