On Friday, CPD&nbsp;announced seven paintball gun attacks within the last 24 hours.&nbsp;One victim lost an eye and six&nbsp;arrests have been made. There were a total of seven victims and five paintball guns were recovered, including ammunition, CPD said.

CHICAGO - The number of paintball attacks in Chicago has skyrocketed this fall, according to police records obtained by the Chicago Sun-Times.

There have been 208 paintball shootings reported across the city in September and October, the records show. That’s nearly five times the 42 attacks reported between January and August.

Though the shootings have been recorded all over the city, the South and West sides have seen the brunt of them. The Englewood and West Englewood community areas saw the most attacks, with 17 combined shootings reported in September. (CPD did not release specific data on where the shootings have taken place in October.)

Chatham — where a 44-year-old CTA bus driver was targeted on Monday — is next on the list with seven reported attacks last month, while Austin recorded six.

Six people were arrested Friday in connection with a string of paintball shootings in Little Village and Lawndale.

Seven different paintball attacks were reported from Thursday night to Friday night in the Chicago Police Department’s 10th District, which covers the Lawndale and Little Village neighborhoods. The attacks left seven people injured, including one man who lost his eye, according to Chicago police spokesman Tom Ahern.

Deputy Chief Ernest Cato said six people were arrested Friday after being found with paintball guns and assorted paraphernalia. Detectives are investigating whether those in custody carried out any of the seven latest shootings, Cato said at a news conference Friday at the 10th Police District station, 3315 Ogden Ave.

Paintball shootings across the city have skyrocketed this fall, with at least 208 attacks reported in September and October — nearly five times the 42 paintball shootings reported from January to August. The bulk of those shootings have happened on the South and West Sides.

Cato did not say what he believes is driving the increase in paintball shootings, but said the trend is new to Chicago.

“It’s something that has increased, but I want to put the word out there right now: We are focused on this. We’re going to treat these paint guns like they’re regular guns, like they’re shooting real bullets, and today was a great effort by the officers in the 10th District,” Cato said.

“The Chicago Police Department has seen an uptick in paintball incidents across the city in the weeks leading up to Halloween,” the department said in a statement noting that 120 of the attacks happened since Oct. 1. “Using a paintball gun on an unsuspecting person is not only reckless, but also extremely dangerous. The projectiles can cause serious injuries and the shooter can be charged with a felony. CPD urges residents to stay vigilant of your surroundings and report any suspicious activity to police.” 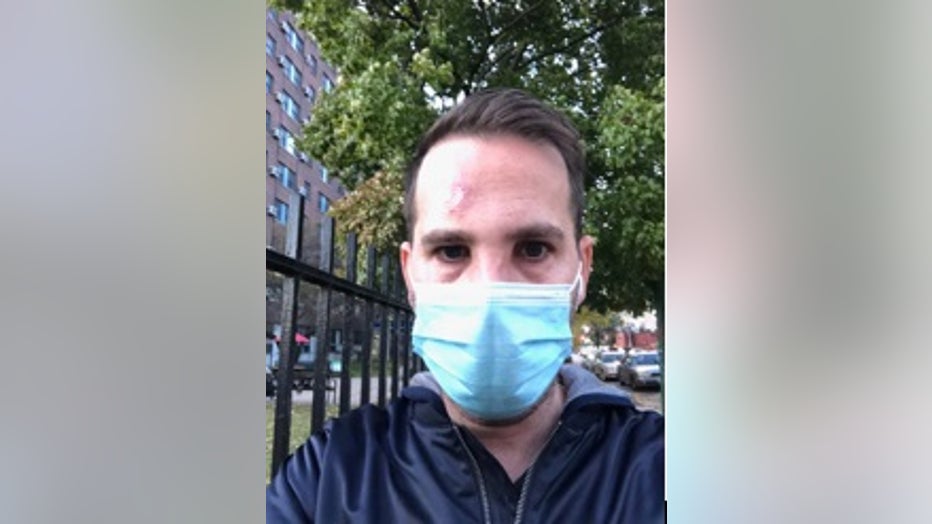 Chris Trani was hit in the forehead in a paintball attack. | Provided photo

Police didn’t respond to questions about what might be driving the attacks or whether any are related.

Ald. Ray Lopez (15th), whose ward covers parts of West Englewood, said residents have complained to his office about the spike in shootings, and that he has been in weekly communication with 7th District police in an attempt to identify the offenders responsible.

Citing a man “in his 40s or 50s” who is believed to be supplying paintball guns to his friends, Lopez said he thinks boredom is part of what is driving the attacks.

“The casualty of these paintball war games are the residents who are just trying to live peacefully despite the maelstrom swirling around them, with COVID and everything else. This is unneeded stupidity,” Lopez said.

“The fact that it’s across demographic, crossing age groups, shows me it’s individuals with access to these paintball guns and an over-abundance of free time,” Lopez said. “Especially if they see other people doing it, they get the idea they can play urban commando.”

Dr. Hassan Shah, assistant professor of ophthalmology and visual science at UChicago Medicine, says the University of Chicago Medical Center has seen the impact of the sharp rise in attacks, recalling a weekend earlier this month where the hospital treated eight patients for paintball-related injuries.

“We’ve seen the full spectrum of injuries, from bleeding inside the eye to severe damage where the eye is ruptured, where we cannot repair the eye and may even have to recommend removal of the eye,” Shah said.

RELATED: Man shot in the eye by paintball in South Loop

Northwestern Medical Center in Streeterville has seen an increase in cases as well, including two patients whose eyes were ruptured in paintball attacks in recent weeks. The victims will suffer permanent vision damage because of it, said Nicholas Volpe, chair of the ophthalmology department at the Northwestern Feinberg School of Medicine.

The paintballs are so dangerous because they are like a “BB the size of a marble, going as fast as a BB, so it’s a very heavy object that if it hits your eye, it can be very destructive,” Volpe said.

“It might seem like an innocent way of getting attention or expressing yourself, or not thinking like you’re going to introduce injuries, but if one of these paintballs hits somebody in the eye, it is very likely that it can cause a severe and blinding injury,” Volpe said.

Ophthalmologists have been stressing eye safety in the paintball world for decades, Volpe said, but usually in the context of a competitive game.

Even if a paintball doesn’t cause lasting injuries, shootings can have a lingering traumatic effect. Chris Trani, of Lake View, said he doesn’t feel as comfortable going out at night since he was shot early Oct. 12 in Lincoln Park.

Trani was biking north on the sidewalk in the 2600 block of North Sheffield when he heard someone in a vehicle shout, “‘Hey, man!’” he recalled in an interview. When he turned to look, he was pelted with a barrage of paintballs, some missing his eyes by just inches, with at least one leaving a large welt on his forehead. By the time he was able to get up off the ground, the vehicle was long gone.

“There’s an element of surprise, it catches you off guard and you’re scared and frightened,” Trani said. “You don’t know if this is a drive-by, am I going to die, am I getting shot for real?”

Trani said he filed a police report the next day but hasn’t heard back from the department. Police said this week that no one was in custody for the shooting. The department also didn’t respond to questions about whether arrests had been made in the other paintball attacks around the city.

“I understand that [the police department] is under strain but I have to admit that’s been a pretty sad element of all this,” Trani said. “I haven’t gotten a call, I haven’t gotten an email, no one’s been in touch, which is a shame because it’s a missed opportunity.”