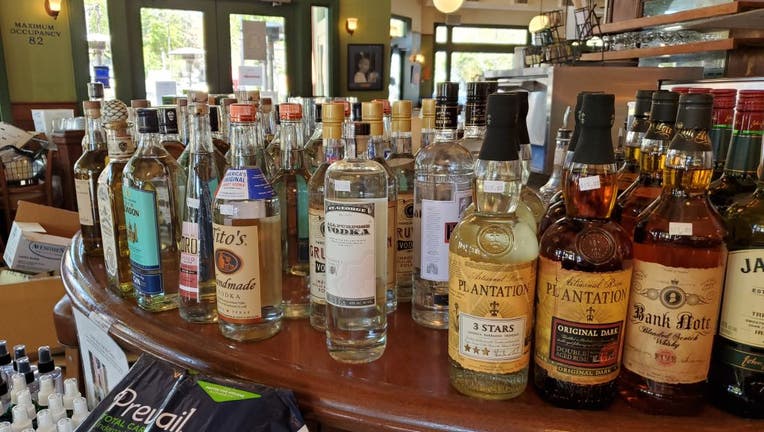 Products including liquor are on display at Tutu's in Lafayette, California, a restaurant which has adopted a general store model selling groceries and supplies during an outbreak of COVID-19 coronavirus, April 14, 2020. (Photo by Smith Collection/Ga

Alcohol, cigarettes, adult entertainment and lottery tickets are just some of the items 70% of Americans are splurging on during the pandemic, a new survey from financial services company MagnifyMoney suggests.

RELATED: As alcohol sales increase, some doctors concerned about isolation as trigger for addicts

The survey polled 1,550 Americans between Jan. 8 and Jan. 11, almost a full year since the virus became widespread in the U.S., and found that consumers had spent nearly $950 each on their vices since the start of the pandemic. And 38% of those said they used money from their savings to cover the not-so-cheap thrills, posing potentially pricey long-term financial consequences.

Consumers who struggled the most during the pandemic have been saddled with debt as a result of their spending, including: 33% who were laid off or furloughed; 26% of millennials; and 21% of GenZers. And 17% of all respondents went into debt for a vice within the past year.

A surgeon in Texas revealed she’s seeing a pattern of lung scarring in some patients who have had COVID-19 that’s worse than what she sees in smokers’ lungs.

Michael Salogub., 29, who lives in Westchester, N.Y., can relate. He admits spending more than $1,000 on his iced coffee habit (despite having a coffee machine at home), adding that he's gone on a few too many Amazon spending sprees for "unnecessary gadgets."

"It’s 100% instant gratification," Salogub told Fox Business, admitting he should rein in the habits after buying a home during the pandemic. "You can’t go to the store, so it gets the endorphins pumping once you see the ‘package is 10 blocks away’ [in a tracking email]. It’s nice to get something to look forward to that’s not canceled or rescheduled because of COVID," he added.

He's certainly not alone. A number of studies have shown that increased stress can lead to an uptick in impulse consumer spending on tangible items and fleeting experiences. A separate report from CreditKarama.com found that 52% of Americans have impulsively shopped to deal with feelings of stress, anxiety or depression — all of which are on the rise as a result of isolation, job loss, and grief brought on by the pandemic.

What's more, unemployment and furloughs during the pandemic have also led to increased spending with 28% of those surveyed who were either laid off or furloughed admitting to spending more money on adult entertainment specifically, the survey found.

Still, many are grappling with buyer’s remorse as a result. Indeed, 45% of those who spent money on vices in 2020 said they feel guilty about it, according to the MagnifyMoney survey.