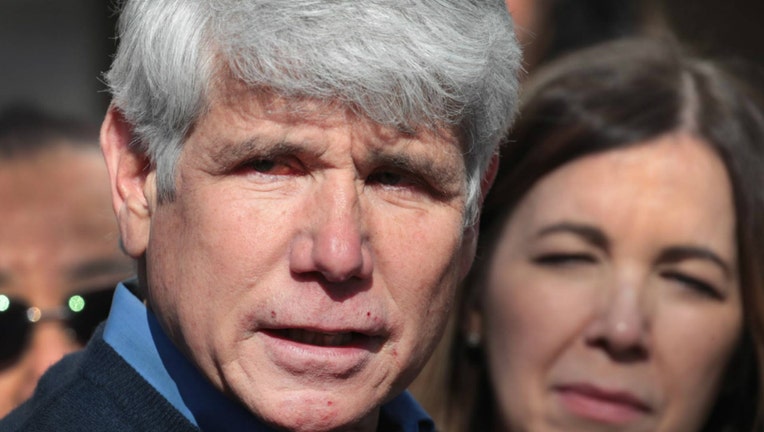 With his wife Patti by his side, former Illinois Governor Rod Blagojevich speaks during a press conference in front of his home on February 19, 2020 in Chicago, Illinois. Blagojevich, who had been serving time in federal prison for attempting to sell

The panel’s ruling came a week after commission attorneys reminded the three-member board about some of the things that led to Blagojevich’s conviction on corruption charges and 14-year prison sentence.

In its four-page decision, the panel noted that Blagojevich sought to “further his own interests” as governor despite his oath of office and that he “has not acknowledged that his conduct was wrongful or expressed any remorse.” The panel also noted that Blagojevich failed to appear for his disciplinary hearing on Feb. 25, saying it demonstrated “a lack of respect for the disciplinary process and the legal profession.”

Blagojevich’s spokesman, Mark Vargas, tweeted a statement from the former governor on Tuesday in which Blagojevich pointed out that he hasn’t practiced law since 1995.

“Imagine yourself sitting on a plane and then the pilot announces before takeoff that he hasn’t flown in 25 years,” Blagojevich said. “Wouldn’t you want to get off that plane? I don’t want to hurt anybody.”

The Illinois Supreme Court would have to approve the panel’s decision before Blagojevich could be disbarred. He was released from prison last month after President Donald Trump commuted his sentence.

Blagojevich, 63, graduated from Pepperdine University’s law school in 1983 and was admitted to the Illinois bar the next year. He worked as an assistant Cook County state’s attorney for years before entering politics.

Full Interview: Rod Blagojevich sits down with FOX 32 to talk about his time in prison, what’s next