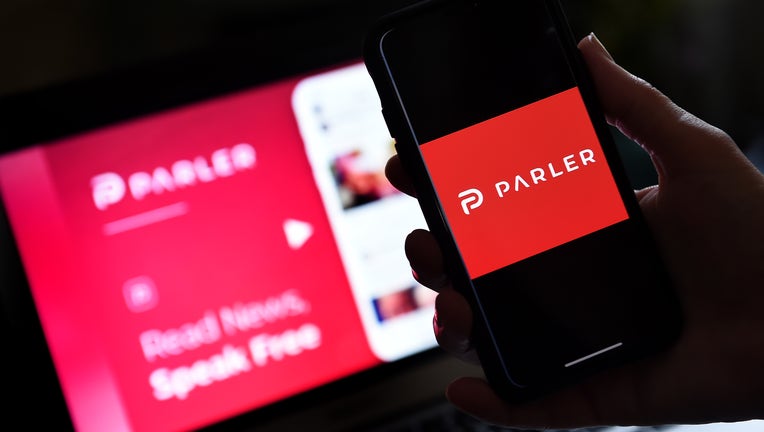 This illustration picture shows social media application logo from Parler displayed on a smartphone with its website in the background in Arlington, Virginia on July 2, 2020. - Amid rising turmoil in social media, recently formed social network Parle

"We have always supported diverse points of view being represented on the App Store, but there is no place on our platform for threats of violence and illegal activity," the company said in a statement to FOX Television Stations. "Parler has not taken adequate measures to address the proliferation of these threats to people’s safety. We have suspended Parler from the App Store until they resolve these issues."

Parler surged to No. 1 among the Apple App Store's free apps Saturday after Google suspended the "free speech" social media platform from its Play Store.

Sean Davis, co-founder of conservative outlet The Federalist, tweeted Friday that Apple is asking Parler to engage in "censorship policies" or face de-listing, citing two people familiar with the situation.

The surge in downloads comes a day after Google's suspension and Twitter's Friday decision to permanently ban President Trump's personal account after a mob of his loyalists stormed the U.S. Capitol, resulting in bloodshed. The tech company accused Trump of inciting the violence

Neither Parler nor the App Store immediately responded to inquiries from Fox Business.

RELATED: Trump hints at starting his own social platform after Twitter ban

On Friday, App FIgures estimated that "downloads grew to more than 340,000, up from about 12,000 in the prior week" based on company data. The total number of downloads "between Wednesday and Friday are estimated to have added more than 450,000 new downloads."

A Google spokesperson confirmed to Fox News in a Friday statement that its "longstanding policies" require that apps with user-generated content have measures in place to remove certain obscene content – including posts that incite violence. Developers agree to those terms.

"We’re aware of continued posting in the Parler app that seeks to incite ongoing violence in the U.S.," a Google spokesperson wrote in a statement. "In light of this ongoing and urgent public safety threat, we are suspending the app’s listings from the Play Store until it addresses these issues."

Trump tweeted from the @POTUS Twitter account on Friday that officials have been "negotiating with various other sites and will have a big announcement soon."

"As I have been saying for a long time, Twitter has gone further and further in banning free speech, and tonight, Twitter employees have coordinated with the Democrats and the Radical Left in removing my account from their platform, to silence me — and YOU, the 75,000,000 great patriots who voted for me," he tweeted.

Parler's "mission is to create a social platform in the spirit of the First Amendment to the United States Constitution," according to its Community Guidelines, which states that the platform does not allow "child sexual abuse material, content posted by or on behalf of terrorist organizations [and] intellectual property theft."

The website may also flag material promoting "criminal solicitation, fraud and nuisance," even if it is not illegal.