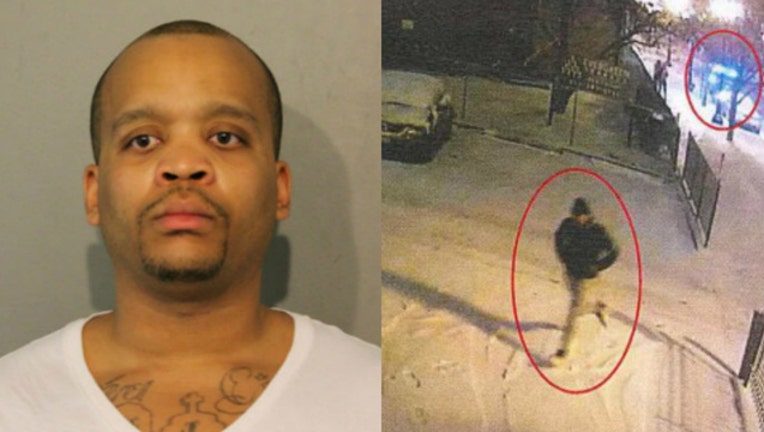 CHICAGO (Sun-Times Media Wire) - A parolee charged with gun possession after allegedly running away from a traffic stop in the Old Town neighborhood has been indicted on a federal weapons charge.

Gaston Tucker, 32, is charged with one count of illegal possession of a firearm by a felon, according to a statement from the U.S. Attorney’s Office for the Northern District of Illinois. U.S. Magistrate Judge Maria Valdez ordered him held in federal custody without bail on July 9.

Tucker was sitting in the back seat of a red Nissan sedan parked in front of a fire hydrant shortly after 7 p.m. on Feb. 17 in the 1300 block of North Sedgwick Street, according to Chicago police and a federal criminal complaint filed July 1. A Chicago police officer approached the car and asked the occupants for identification.

The driver handed over a suspended license while Tucker gave the officer his Illinois Department of Corrections ID card, prosecutors said. When the officer went back to her car to look up the IDs, Tucker got out of the Nissan and ran south on Sedgwick.

As officers searched the area for Tucker, two security guards from a nearby apartment complex told police they saw someone run through the parking lot and drop an object under a dumpster, according to the complaint. Video from nearby surveillance cameras also showed someone matching Tucker’s description running through the lot and tossing something under the dumpster.

Police eventually found Tucker at his home in the Hermosa neighborhood on the Northwest Side, prosecutors said. The officer who conducted the traffic stop positively identified him and he was taken into custody.

Tucker was previously charged with multiple felony counts of unlawful use of a weapon by a felon, according to police and Cook County court records.

At the time of his arrest, he was on parole for a 2010 conviction for attempted murder and aggravated battery with a firearm for which he’d been sentenced to 13 years in prison, federal prosecutors said.

Tucker was released on parole on Dec. 10, 2018, according to Illinois Department of Corrections records. He also has prior convictions for drug possession dating back to 2004.

The federal charge was brought against Tucker as part of the U.S. Department of Justice’s “Project Safe Neighborhoods” violence reduction strategy, the U.S. attorney’s office said. The gun charge carries a sentence of up to 10 years in prison.

Tucker’s next court appearance on the state gun possession charges was scheduled for July 24, according to court records.