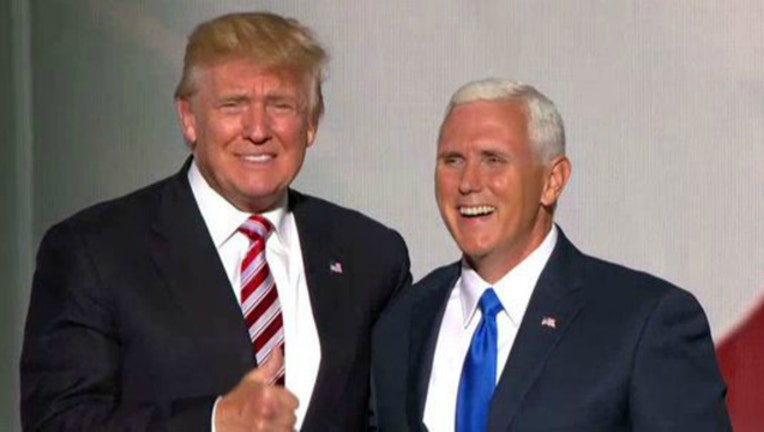 NEW YORK (AP) - Vice President-elect Mike Pence is pledging to a group of mayors that the Trump administration will make a serious investment in infrastructure.

Speaking Tuesday to a meeting of the United States Conference of Mayors, Pence said President-elect Donald Trump told him to pass on that "we're going to do an infrastructure bill and it's going to be big."

Trump, who consistently lamented the state of American bridges, roads and airports on the campaign trail, has promised to invest $1 trillion in transportation and infrastructure spending, though he has provided few details.

Pence also said the new administration will work with cities as partners. He looked ahead to Friday's inauguration, saying it will mark "the dawn of a new era for our country, it's an era of growth and opportunity and renewed greatness for America."

Trump was set to make his first Washington trip in weeks Tuesday, as his inauguration festivities approach.

Trump planned to fly in for a dinner honoring Tom Barrack, his longtime friend and head of the Inauguration Committee. The president-elect will return to New York after the dinner. He'll make his final trip to Washington on Thursday to attend a concert at the Lincoln Memorial and to stay, as is custom for incoming presidents, at Blair House, the presidential guest quarters, the night before he's sworn in.

In New York on Tuesday, Trump met with Boeing CEO Dennis Muilenburg. Trump has criticized the cost of Boeing's Air Force One program.

"We made some great progress to refine requirements for Air Force One, to streamline the process, to streamline certain features, all of that will lead to a better airplane at a lower cost," Muilenberg said after the meeting. He said Trump "is doing a good job as an agent of business" and added that more conversations would be forthcoming. He did not set a timeline on settling on a final price tag.

Trump's comments on Twitter and to news organizations threatened to overshadow the pomp and circumstance of Friday's inauguration.

On Tuesday, the president-elect continued his attacks on Rep. John Lewis, whom he berated Saturday for challenging his legitimacy to be the next president. Trump said that the veteran African-American congressman from Georgia had wrongly claimed that it would be the first inauguration he's missed since 1987.

"WRONG (or lie!)" Trump tweeted. "He boycotted Bush 43 also because he 'thought it would be hypocritical to attend Bush's swearing-in....he doesn't believe Bush is the true elected president.' Sound familiar!"

Lewis' office on Tuesday confirmed that the civil rights icon had missed George W. Bush's 2001 swearing-in, saying it was also a form of dissent.

Trump has been widely criticized for the comments and more than 40 House Democrats plan to boycott his inauguration. Trump had sought to ease friction Monday, meeting with a son of Martin Luther King Jr.

Asked about the boycott on a phone call with reporters, Trump spokesman Sean Spicer said they would "love for every member of Congress to attend but if they don't, we've got some great seats for others to partake in. It's a shame that these folks don't want to be part of the peaceful transfer of power."

White House press secretary Josh Earnest said the boycott was a "reflection of the division" in the country.

Trump also put GOP lawmakers on the defensive Tuesday over their tax plan, after he called their approach "too complicated" in an interview with The Wall Street Journal.

At issue is a proposal called "border adjustment" that would tax imports to the U.S. while exempting exports. It's part of a sweeping planned rewrite of the U.S. tax code aimed at lowering overall rates on corporations from 35 percent to 20 percent.

Trump also appeared to outline a different health care goal than many Republicans over the weekend. During interviews with The Washington Post and The Wall Street Journal, Trump said that after the repeal of the Affordable Care Act, he'll offer "insurance for everybody." Congressional Republicans have been careful to say that they want to provide "universal access."

European Union nations bracing for Trump's ascension showed defiance Monday in the face of the president-elect's stinging comments on everything from NATO and German cars to the crumbling of the European Union.

Also this week, Trump's picks for Cabinet posts continue their trek to Capitol Hill to win support from lawmakers considering their confirmation for Cabinet positions.

On Tuesday, Republican Rep. Ryan Zinke of Montana made his case to be interior secretary. And Betsy DeVos, Trump's pick for education secretary, has a confirmation hearing Tuesday evening.