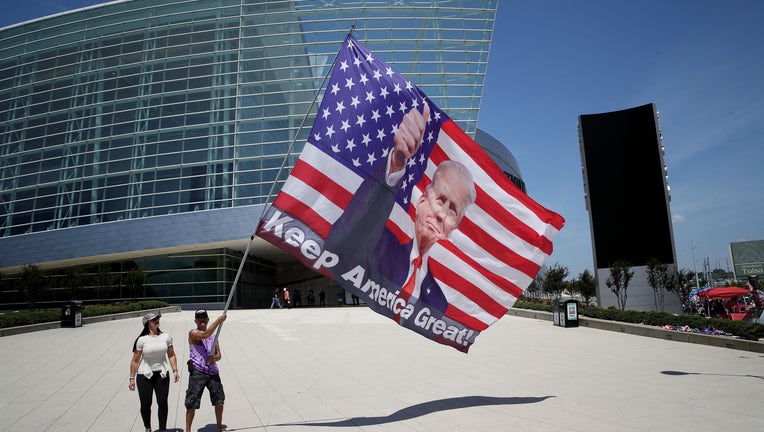 TULSA, Okla. - More than two days before the president is set to take the stage in Oklahoma for his first rally since the coronavirus lockdowns, ardent Trump supporters are already lining up to camp outside the venue.

President Trump on Saturday night is scheduled to rally with supporters at BOK Center, a venue in Tulsa which can hold around 20,000 people.

Supporters have been seen lining the street since Monday.

“So you are prepared to sit out here for five-six days?” a local reporter with KFOR asked a group holding up a Trump 2020 flag this week.

“We’re here till after the rally,” one woman assured the reporter.

In another video, a man who was first in line claimed to have staked his spot Monday at 2:30 a.m.

In one video, a family is captured playing the guitar and singing re-election songs calling for “four more years.”

Robin Stites, 58, had the second spot in line and sat in portable chairs under an umbrella with friends. She told USA Today she’d secured her spot on Monday and believed the wait was worth it.

"I'd love to let him know we're here for him. We want to show our support," she said. "We feel like President Trump and his family have dedicated their lives to helping our country. Sacrificing a week of our lives is nothing for what Trump has done for us."

Stites said she’s able to sneak home each night as others in line watch over her spot for her. Many are able to get away to shower and change as they rotate watching over one another’s spots.

"You wouldn't believe the people who stop and bring us stuff – water, donuts, Popsicles," Stites said.

She said a man had stopped earlier to give them $25 for food and someone from Tennessee sent eight pizzas from a local pizza shop to the group.

Stites said the group had at points been heckled by motorists shouting “Black Lives Matter!” but they were outweighed by donations and honks from supporters.

"I've had a couple of black people come by and scream at us 'Black Lives Matter!' We said 'Yeah, they do,'" Stites said Wednesday. "Us Trump people, we love everybody. We're just not about the rioting and tearing up things."

MSNBC asked protesters if they were concerned about catching Covid-19 while attending the rally in such proximity to others.

“Will I put a mask on? I don’t know until I get in there,” said another supporter.

“I’m not saying that it isn’t real. The numbers do not add up, it is not as bad as people say,” said another.

Republicans have called out hypocrisy by the media for seemingly glowing reports of tens of thousands taking to the streets in close proximity to protest police brutality following the death of George Floyd on May 25 while he was in police custody.

White House press secretary Kayleigh McEnany also argued hypocrisy is at play when she faced a barrage of questions on Wednesday regarding rally concerns.

"While we appreciate the great concern for our rally goers, you should exhibit that same concern for the protesters who are out there not socially distancing in many cases,” McEnany told reporters, as she called on them to work on their “internal cohesion.”

Some in the media, however, pointed out that while the protests took place in open-air the rally will take place at an indoor venue.

Trump's rally was originally scheduled for June 19 in Tulsa, where in 1921, a mob of white residents massacred black residents and burned black businesses. As many as 300 are believed to have died. But after taking criticism amid the protests against police brutality and racism, Trump moved the rally date to June 20 “out of respect.”

“We had previously scheduled our #MAGA Rally in Tulsa, Oklahoma, for June 19th – a big deal. Unfortunately, however, this would fall on the Juneteenth Holiday,” the president wrote late Friday.

“Many of my African American friends and supporters have reached out to suggest that we consider changing the date out of respect for this Holiday, and in observance of this important occasion and all that it represents. I have therefore decided to move our rally to Saturday, June 20th, in order to honor their requests.”