A man wanted on a warrant for murder out of California was shot in the chest by police Tuesday inside Chicago’s Union Station, according to officials.

CHICAGO - A man wanted on a warrant for murder out of California was shot in the chest by police Tuesday inside Chicago’s Union Station, according to officials.

The murder suspect arrived on a train around 5 p.m. and was confronted by Amtrak police officers. The suspect then ran from uniformed officers, injuring an Amtrak employee in the process, officials said. He then pulled a gun and opened fire on Amtrak officers. One officer returned fire, striking the suspect.

The injured Amtrak employee was also taken to an area hospital with minor injuries. 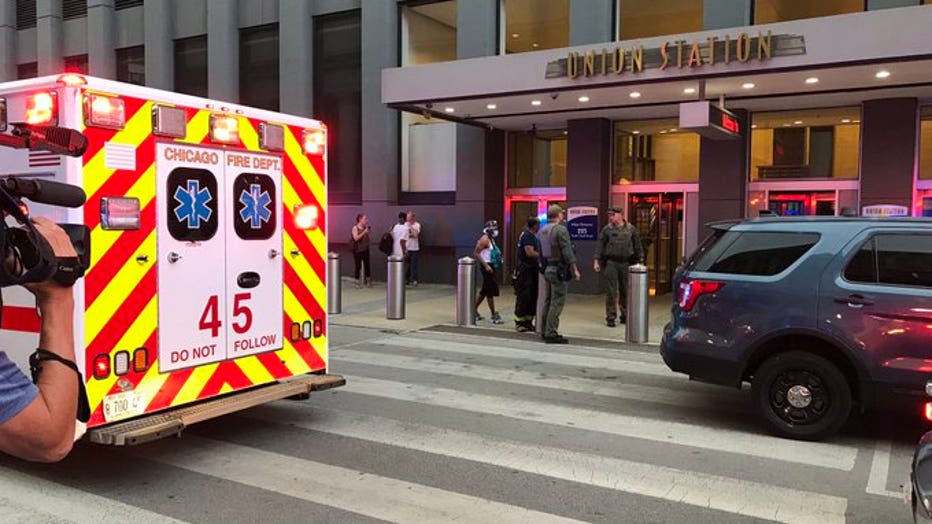 Amtrak had tweeted that all train traffic in Chicago stopped due to ongoing police activity. However, as of 6:30 p.m., service had resumed with some delays.

A full investigation is being conducted by Amtrak and Chicago police, with the Chicago Police Department leading the investigation.

A man was shot in the chest Tuesday inside Chicago's Union Station.

Train passenger Alicia Gainey said she had been waiting for a train to Elkhart, Ind., when she heard people running inside the station shouting.

As she queued up to board her train about an hour after the shooting, Gainey, said she was tired of gun violence.

"It’s crazy. This happens everywhere, all the time," she said.

Stephanie Bommarito, of Rochester Hills, Michigan, was in the restroom when she got a string of harried texts from her husband, Philip.

"It was awful," she said. "(The texts said) ‘Get out … active shooter,’ and I’m trying to get out of the stall," said Bommarito, whose husband had left the train station with their two children, Mia, 9, and Leo, 7.

She said people still were walking casually into the station as she rushed out the doors, and heard nothing on the public address warning that there had been a shooting inside. She met her family on the street, and they waited outside for an all-clear announcement, and wound up missing their 5:50 p.m. train to Detroit.

"I was just worried about my kids and what kind of trauma they might be experiencing," Stephanie Bommarito said of the harrowing final hours of a family trip to the city. "My daughter said ‘This would be a good thing to bring up at show-and-tell,’ and I said, ‘I don’t think the fourth grade needs to hear about this. Show them your I Love Chicago key chain.’"