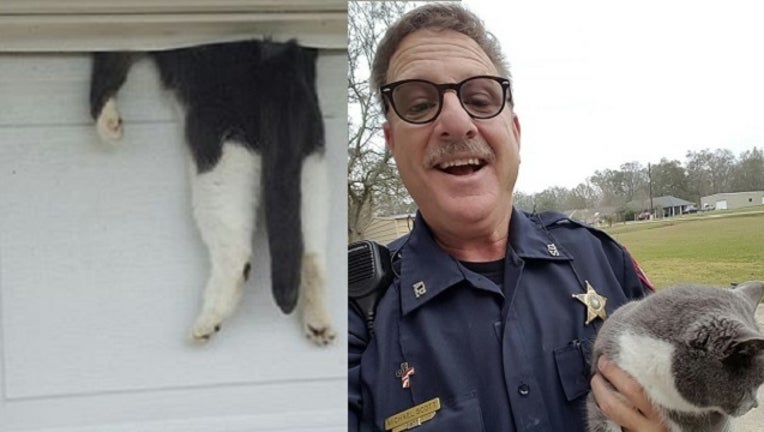 LOUISIANA (WTXF) - A Louisiana Deputy responded to quite the call late last month after a cat became stuck.

Oddly enough the cat was not stuck in the usual tree, but instead, this kitty had become wedged in a garage door of a home.

. “Never in all of my years was I prepared to encounter what I saw upon my arrival,” Deputy Mike Scott explained.

The deputy says a number of neighbors and construction workers were already on the scene trying to help rescue the cat.

"His 34 plus years of law enforcement training quickly kicked in as he hurried to remove the cat safely from the door," The Ascension Parish Sheriff's officer wrote on their Facebook page.

After spending some time trying to remove the cat, the homeowner arrived home to find his yard full of neighbors and Deputy Scott holding their cat.

The cat, whose name is Bella, was check for injuries, but appeared unharmed.

The homeowner told Deputy Scott that he received four feet of water in his residence and he left earlier that day to get some lumber for repairs and Bella must have been sleeping on the garage door and he did not notice when he left.