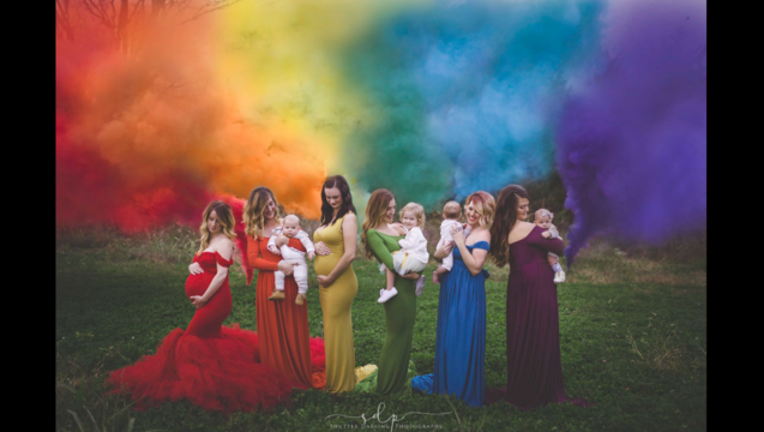 ST. LOUIS, Mo. (KTVU) - "A rainbow baby is a baby born following loss," writes photographer Alex Bolen in a recent Facebook post that has been circulated around the globe and is offering many a place for healing.

Bolen created a powerful image of six women dressed in an array of rainbow of colors, all celebrating the joy of "love after loss."

The women all share a common thread-- they've experienced the heartache of loss during pregnancy.

"I don't think they've ever been in a same 'room' where everyone there has gone through the same thing as them," Bolen told KTVU Fox 2.

She says she came up with the idea for this photo project after she had her own daughter and began meeting other new moms through mommy groups.

She soon learned that many of her new friends had a story that was not that uncommon.

They were celebrating the birth of their "rainbow baby," the baby that came after a painful, difficult journey of trying to bring  life into this world.

"Before that, I didn't know what a rainbow baby was," said Bolen. "I realized a lot of my mom community friends were part of this group."

She also learned that behind each mother with a "rainbow baby" lies a very unique story. "Some moms got to see only one ultrasound, others got to hold their babies for an hour," the 23-year-old photographer said.

So she came up with an idea to tell some of these stories through the click of a camera.

She put out a request for participants on Facebook and was completely floored by the response. Dozens of mothers messaged her and wanted to be a part of her project.

Bolen said it was tough because she could only choose six and wanted the stories to represent a wide spectrum of experiences.

Through this powerful image of six women standing in front of a dramatic backdrop of rainbow colored smoke, she has told their very intimate stories of loss and hope renewed.

As part of the photo project, Heather Terranova shared the events of her two miscarriages. "The night before my first ultrasound in March I started bleeding profusely... A miscarriage was confirmed in the ER," Terranova wrote.

She eventually got pregnant again and ended up being blessed with a baby boy, Dominic, now four years old. But when she and her husband tried to have another child, there was more heartbreak.

"I had 5 ultrasounds throughout the first trimester that showed a healthy little baby and a strong heartbeat! Only for the baby to pass away right at the end of our first trimester. I felt shattered. Again?! No way. Lightning doesn't strike the same place twice."

The couple later learned a blood clotting disorder led to the complications. After that, when she got pregnant again, she was under extra medical attention. She gave birth to another boy, Vinny, "the most angelic looking little boy," who is now two.

And Terranova is now awaiting the arrival of "yet another miracle!" She and her husband are expecting their third boy in the coming weeks.

Hillary Funk wrote about her miscarriage during her second pregnancy. "I have a hard time even putting in words the feeling and emotions that just poured down on me... I did a lot ALOT of crying and praying."

Two months after the miscarriage, she got pregnant again. "I was so scared. I was so grateful but it always seemed over shadowed by fear," she wrote.

Baby Zealand was born on June 21st this year. Funk called him "our blessing after the storm. Our beauty after the pain." She wrote, "He will never replace the baby we lost, but he has helped to heal the hole in our hearts."

Kaila Marie, a mother of five wrote that when she learned of her miscarriage, "I felt dead inside honestly, like I lost a part of me! I became depressed and didn't like the person I had become... I kept all my emotions bottled up and cried myself to sleep at night."

But with five kids at home, "I had to be that strong mother and hold everything in."

In July she found out she was pregnant again and is expecting a boy. She thanked Bolen for the opportunity to share her story.

She said her family is so excited to meet their miracle baby and had a message to others with a similar story: "I want other parents to know that there is light at the end of the tunnel after such a tragedy!"

Sara Markivee said she was 19 when she got pregnant and then went through a miscarriage. For years, she quietly carried her pain with her. "I chose to bear the burden alone and stay silent," she wrote.

"I felt like the world was judging me. Like everyone was thinking, 'she was too young to have a baby. She didn't even plan to get pregnant. She doesn't deserve to be sad... So I never talked about it."

Now a mother of two, and three years since her miscarriage, she said she wants others to know, "it's OKAY to talk about your loss. Miscarriage needs to stop being such a taboo subject."

Markivee said she has found relief and strength in sharing her story and urged others to find healing by sharing theirs.

Ashley Jones Behrle has three rainbow babies. She has two daughters and in September became a mother to a little boy.

That journey included "thousands of shots, pills, supplements, transfusions, tears" and along the way, a total of six miscarriages.

"I've been blessed beyond measure, even in the storms. I spent years isolated with our losses but began to speak out because that was the only way I knew how to heal... The children we do have here on this Earth were the ones God knew we needed," Behrle wrote.

Hannah Peltonen said that at 33 weeks of her first pregnancy, as she and her husband prepared to bring a new life into the world, her baby's heart stopped beating.

"I felt like my life was over, completely shattered into a million pieces," Peltonen wrote. And there were other painful emotions: "I felt like such a failure of a mother, that I couldn't even keep my baby alive."

She had to induce the baby and underwent labor for 17 hours.

Peltonen described, "At 9:03am on July 2nd 2015 we welcomed our beautiful baby girl, Flora June Peltonen into this world sleeping."

She held the baby, kissed her, said goodbye, and then went through the excruciating process of picking a dress and casket to lay her "angel baby" to rest.

A few months later, Peltonen and her husband learned they were expecting again.

"Being pregnant again after loss, is probably the second most scary thing on this planet," she explained. "Everyday was a constant worry that it was all going to be ripped from us again."

But this past August 9th, Peltonen and her husband welcomed baby girl, Caprielle Rose.

In the midst of joy there is remembrance. "Having a rainbow does not mean the baby that is gone is being replaced. Because I feel Floras presence with us all the time."

These women shared their stories with hope that others going through similar experiences will see the promise that a rainbow brings-- the promise "of sunshine after rain, of calm after storms, of joy after sadness, of peace after pain, of love after loss."

Bolen says she has learned that loss during and after pregnancy is "one of those subjects that gets brushed under the rug."

She hopes the images of these women standing in rainbow colors can help people heal by allowing them to be a part of a discussion.

Every night after putting her own baby to bed she says she goes online to read the comments left by those who have seen the photos.

"I read every single comment," said Bolen. Many of them, she said, appear to come from women who are sharing their loss for the first time.

While her photos include only six women, they represent the stories of so many more.

"These mommas are just 6 out of the millions that experience pregnancy/infant loss every day," Bolen wrote in her post.

And she said that the "sleeping angels" that came before the rainbow babies are "All loved and never forgotten."