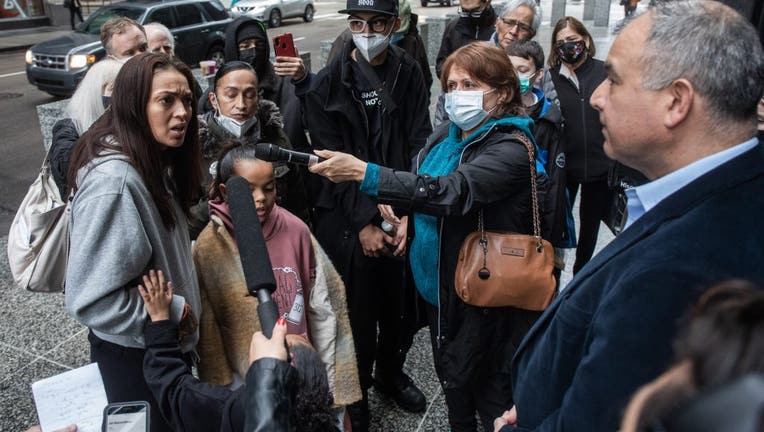 Tanya Lozano, who has asthma and whose two kids also have asthma, talks with Alfred Saucedo, the chief of staff of Debra Shore, the regional administrator for the Environmental Protection Agency Region 5. | Pat Nabong/Sun-Times

CHICAGO - Saying they can’t take any more air pollution in Pilsen because it’s making them sick, a group of six children hand delivered a letter to the top environmental official in Chicago Wednesday asking her to promise to conduct a comprehensive health study of the community before any new government approvals for a longtime scrap-metal operation is allowed.

Debra Shore, the regional administrator for the U.S. Environmental Protection Agency, agreed to briefly meet the children and discuss their concern about Sims Metal Management, a polluting business that is seeking multiple government operating approvals after being found to violate air pollution laws.

Shore said she’d meet with additional community representatives and discuss the study idea with other government officials but stopped short of guaranteeing such a health analysis would be done. Sims shreds and transports large amounts of metal, including scrapped cars, emitting tons of chemicals and other contaminants into the air annually. The limits are required to be controlled so they don’t harm the public.

Including the children, more than 20 protesters demonstrated outside the EPA regional office at 77 W. Jackson Blvd. and demanded to meet with Shore. After about a 30-minute standoff with EPA staff and security, the children were allowed to enter the building with a pair of adults and deliver their letter.

"This is my school backpack. Inside sometimes I have pencils and crayons. Sometimes my homework is in there, too. I sometimes carry a lunch but I always have to carry this. This is my asthma inhaler," said 8-year-old Apollonia Jackson of Pilsen, holding up her breathing device outside the building.

Chicago 'Demolition Surcharge Ordinance' up for vote this week

A plan to slow gentrification in two of Chicago’s hottest neighborhoods is up for a City Council vote this week.

Apollonia, her 4-year-old brother Junie and their mother Tanya Lozano along with four other children were allowed to go inside and present a letter to Shore that said residents are "inundated with factories, trains and trucks pouring massive amounts of pollutants into the air we breathe." Shore shook Apollonia’s hand.

The letter, signed by more than a dozen Southwest Side community and religious groups, said the cumulative impact of the largely Latino, heavily industrial area weighs on the health of its residents, especially children who go to school near polluters such as Sims.

"We have six railroad switching yards in our community near grade schools," the letter said. "We have 10 times the amount of asthma among our children that people in white middle-class communities have. Somewhere a line must be drawn to let polluters and politicians know that our community will no longer be the toilet bowl for the entire region."

In an interview, Shore said a health study would need to be conducted with the state and city of Chicago. She said the Illinois EPA is continuing to work with Sims on installing pollution controls. The EPA delegates a lot of pollution enforcement and permitting to state agencies such as Illinois EPA. Community members, however, believe that a health study should be done first and that such an analysis should determine whether Sims should be able to continue operating at 2500 S. Paulina Street along the Chicago River in Pilsen.

"The study will determine whether any new permits for any industry should be added to what we already have," the letter said.

A comprehensive health study was conducted on the Southeast Side last year to determine the fate of a city operating permit for a similar business, the relocated General Iron. Last month, Mayor Lori Lightfoot’s administration rejected that business’ permit application.