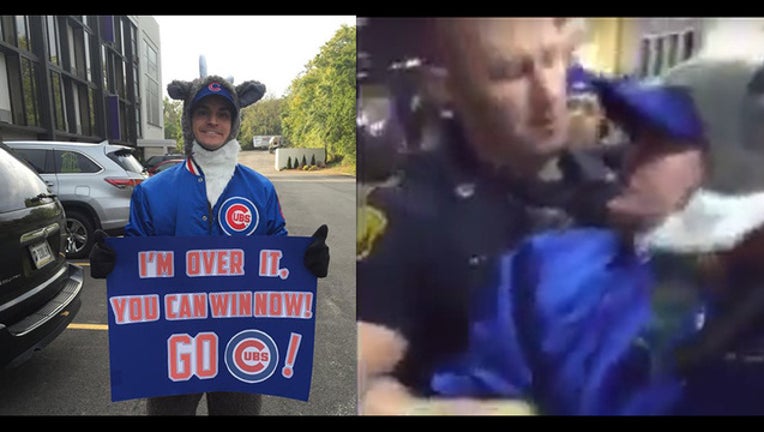 PITTSBURGH (AP) — The city will investigate a police officer's takedown slam of a Chicago Cubs fan who was kicked out of the National League wild-card playoff game.

But a mayoral spokesman said Tuesday that "it's way too early to judge" whether the officer's actions were abusive.

The video of the Oct. 7 takedown, which surfaced on YouTube, is about 1 ½ minutes long and doesn't always clearly focus on the fan and the officer. It isn't clear from the video what led to the fan being kicked out of PNC Park.

The video shows the fan talking with ballpark staff outside the seating area and the officer arriving to say "Let's go" and grabbing the fan's arm. The fan responds, "Can I talk to you?" as the officer leads then pushes the fan along before putting his arm around the fan's neck.

"Seriously, stop it!" the fan says, prompting the officer to briefly, but unclearly, respond. After the camera jiggles for several seconds, the officer bearhugs the fan from behind and slams him to the ground, where he's handcuffed.

The man wasn't charged and was released once he was outside the stadium.

Police union attorney Brian Campbell said it appears the officer acted properly because police are trained to use a "continuum of control." That is, if a person resists an officer's command, the officer can grab the person to make him comply and, if necessary, take him down and handcuff him if he continues to resist.

The fan was dressed as a goat in an apparent nod to a Cubs superstition that a tavern owner put a curse on the team when he was kicked out of a 1945 World Series game at Wrigley Field for bringing his pet goat. The team has not appeared in the World Series since.

Elizabeth Pittinger, executive director of the city's Citizen Police Review Board, said she believes the officer unnecessarily "escalated" the situation, but she stopped short of saying the force was illegal.

"I think the thing we're looking at is what made the officer make that decision," Pittinger said. "If the guy was really resisting and was really presenting that much of a threat, then why didn't he charge him with anything?"

The office investigates allegations of misconduct by police and other city employees and has the power to recommend, but not implement, discipline. That's done by the head of the city agency where the employee works. The Citizen Police Review Board, which operates independently from city government, also makes nonbinding disciplinary recommendations.

Peduto's spokesman, Tim McNulty, on Tuesday clarified the mayor's earlier remarks about the city's plans for an investigation.

"What the mayor said when pressed by people to say 'Did he think this was abuse?' is that it's way too early to judge," McNulty said.

Pittinger said the officer, who has been on the force for four years, will probably learn to use more discretion with experience.

"It's just a matter of professional maturity," Pittinger said.

"Put yourself in the goat's shoes."