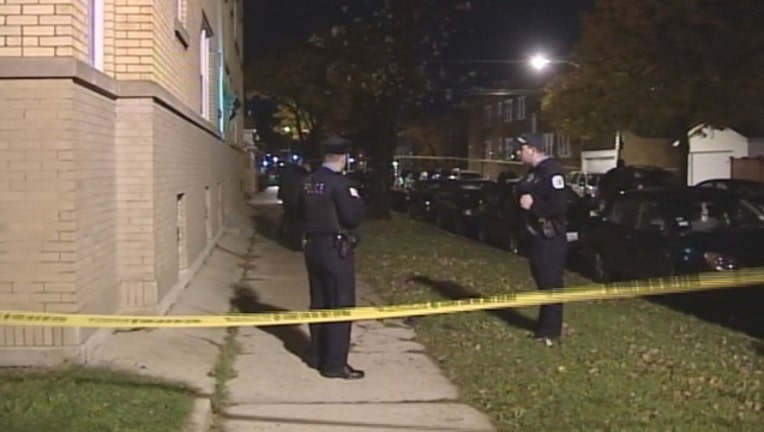 Chicago Police investigate in the 2500 block of North Lavergne, where a man was shot to death early Tuesday. | NVP News

CHICAGO (SUN TIMES MEDIA WIRE) - Two people were slain and at least 10 more wounded in shootings across the city on Tuesday, according to Chicago Police.

The latest killing happened shortly after 8 p.m. along the border of the South Shore and South Chicago neighborhoods, where officers responding to a shooting in the 2800 block of East 79th Street found a 30-year-old man on a sidewalk with two gunshot wounds to the chest. He died at Christ Medical Center in Oak Lawn, police said.

The other homicide happened about 1:30 a.m. in the Cragin neighborhood on the Northwest Side. Officers responding to calls of a person down in the 2500 block of North Lavergne found a 51-year-old man with a gunshot wound to the lower abdomen. He died at the scene at 1:50 a.m., authorities said.

The Cook County medical examiner’s office has not released either victim’s name.

The most recent nonfatal attack happened about 9:15 p.m. on the Near West Side, where a car pulled up to a 29-year-old man sitting in the passenger seat of a van in the 2300 block of West Adams and opened fire, grazing his head. He was taken to Stroger Hospital, where his condition was stabilized, police said.

About 8:30 p.m., someone walked up to a 14-year-old boy taking out trash in a North Austin alley and shot him in the leg in the 1700 block of North Linder. The boy took himself to Loretto Hospital and his condition was stabilized, police said.

Two more teenage boys were shot about 6:45 p.m. in Roseland on the Far South Side. They were walking in the 11400 block of South Eggleston when someone got out of a dark-colored vehicle and shot a 16-year-old in the shoulder and a 17-year-old in the calf, police said. They were taken in good condition to Roseland Community Hospital.

About 2:20 p.m., a 21-year-old man was standing outside in the 7900 block of South Justine in Auburn Gresham when someone in a red vehicle shot him in the back, police said. He was in fair condition at Christ Medical Center.

Twenty minutes before that, a white SUV pulled up to a 17-year-old boy sitting in a vehicle parked in the 3300 block of West Congress in East Garfield Park and opened fire about 2 p.m., hitting him in the wrist, police said. The teen went to Rush University Medical Center in good condition.

About 9:15 a.m., three men were shot in West Garfield Park. They were on a corner in the 100 block of South Kostner when someone in a passing silver vehicle opened fire, hitting an 18-year-old in the foot, a 21-year-old in the leg and a 58-year-old in the foot. The youngest man was taken to Mount Sinai Hospital, while the older two went to Stroger, police said. All were in good condition.

Tuesday’s first nonfatal shooting happened about 1:40 a.m. in the South Side Park Manor neighborhood. A 30-year-old man was driving in the 7000 block of South King Drive when he heard shots and realized he’d been hit in the leg, police said. His condition was stabilized at the University of Chicago Medical Center.