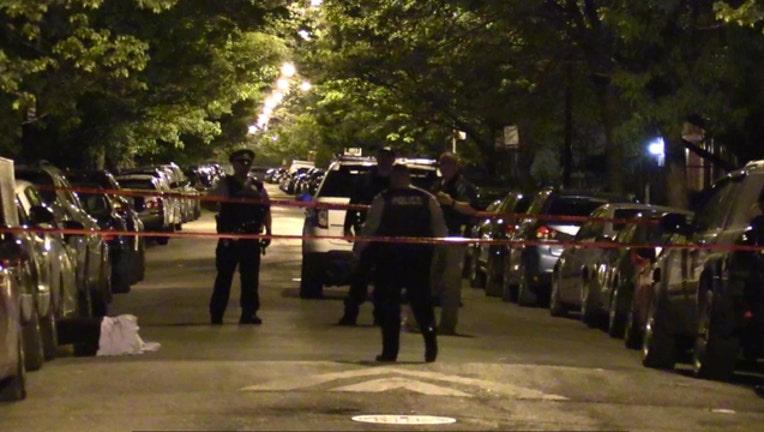 One man was killed and two other people were injured in a shooting Monday night in the 1500 block of West Walton. | Network Video Productions

CHICAGO (SUN TIMES MEDIA WIRE) - Three men were killed and at least eight other people — including a 15-year-old boy and 16-year-old girl — were wounded in shootings Monday across Chicago.

Most recently, one man was killed and two others were injured in a Noble Square neighborhood shooting on the Near West Side, police said.

The 26-year-old man was standing with two other men in the 1500 block of West Walton shortly after 11 p.m. when another male walked up and fired shots, according to Chicago Police.

He suffered gunshot wounds to the chest and was pronounced dead at the scene, police said.

Less than 30 minutes earlier, a man was shot to death in the Irving Park neighborhood on the Northwest Side, police said.

The man was standing outside in the 4300 block of North Elston about 10:50 p.m. when he was approached by another male who pulled out a gun and opened fire, police said.

The man, whose exact age was not known, was found lying on the sidewalk with a gunshot wound to the head, police said. He was pronounced dead at the scene.

Police said a suspect was in custody early Tuesday.

About 8:35 p.m., a man was shot to death on an I-57 ramp in the Morgan Park neighborhood on the Far South Side, police said.

The 37-year-old was driving a silver van in the 11000 block of South Hamlet near the I-57 on-ramp when someone fired shots, police said.

The van continued north onto I-57 before coming to a stop near 108th Street, police said. The man was pronounced dead at the scene with a gunshot wound to the head.

The Cook County medical examiner’s office could not immediately confirm any of the fatalities early Tuesday.

The most recent nonfatal shooting left a 16-year-old girl wounded Monday night in the North Lawndale neighborhood on the West Side.

The teenager was riding a bicycle about 7:20 p.m. in the 1300 block of South Independence when a male walked up and fired shots in her direction, police said. She was shot in the chest and taken to Mount Sinai Hospital, where her condition was stabilized.

About an hour earlier, a 15-year-old boy was shot in the Austin neighborhood on the West Side. He was standing outside in the 1600 block of North Monitor about 6:22 p.m. when someone in a passing vehicle shot him in the foot, police said. He was taken to West Suburban Medical Center in Oak Park in good condition.

About 5:15 p.m., a 24-year-old man was shot in the West Pullman neighborhood on the Far South Side. He was shot about 5:15 p.m. in the 12200 block of South Emerald, police said. He took himself to MetroSouth Medical Center in Blue Island with a gunshot wound to the leg.

Earlier Monday afternoon, a man was injured in a South Side Englewood neighborhood shooting. The 51-year-old was shot in the chest about 2 p.m. in the 6700 block of South Green, police said. He was taken to Advocate Christ Medical Center in Oak Lawn, where his condition was stabilized.

More then eight hours earlier, a bullet grazed a man’s back in a Back of the Yards neighborhood shooting on the South Side. He showed up at Holy Cross Hospital about 5:45 a.m. after the attack in the 4900 block of South Throop, police said. The man’s exact age wasn’t immediately known and he wasn’t cooperating with investigators about the specifics of the shooting. He was listed in good condition.

Monday’s first shooting happened about 12:35 a.m. in the Kelvyn Park neighborhood on the Northwest Side. The man was walking on the sidewalk in the 4700 block of West Fullerton when someone pulled up in a dark-colored SUV and fired shots, police said. The man was struck in the right arm and took himself to Presence Saints Mary and Elizabeth Medical Center, where his condition was stabilized.