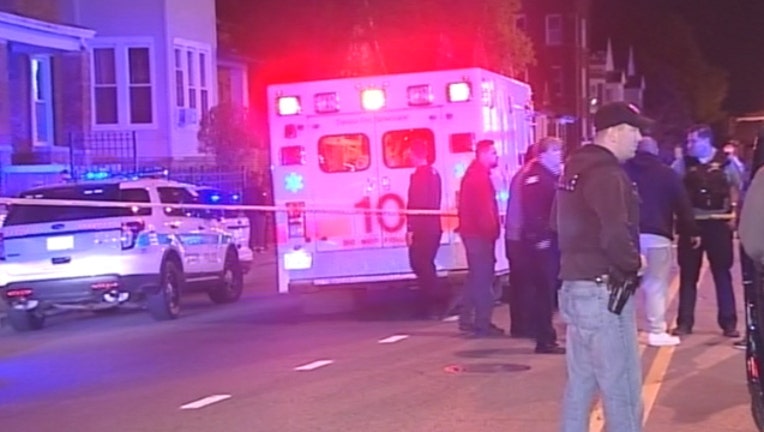 CHICAGO (SUN TIMES MEDIA WIRE) - Four people were killed and at least six others were wounded in shootings Monday across Chicago.

About 10:30 p.m., a man was shot to death in the Hermosa neighborhood on the Northwest Side.

Robert Roseneau, 28, was standing in front of a residence in the 2000 block of North Pulaski about 10:30 p.m. when someone walked up and shot him several times, according to Chicago Police and the Cook County medical examiner’s office.

Roseneau, who lived in the 2000 block of North Avers, was taken to Advocate Illinois Masonic Medical Center, where he was pronounced dead at 11:06 p.m., authorities said.

A “possible offender” was taken into custody after the shooting and a weapon was recovered, police said.

About an hour earlier, a teenage boy was killed and another was wounded in a West Englewood neighborhood shooting on the South Side.

Randle Young, 16, and a 14-year-old boy were walking eastbound in an alley in the 7100 block of South Laflin about 9:35 p.m. when a male walked up and shot them, authorities said.

Young suffered multiple gunshot wounds and was taken to Advocate Christ Medical Center in Oak Lawn, where he was pronounced dead at 10:55 p.m., authorities said. He lived in the 1300 block of West 73rd Street.

The younger boy suffered a graze wound to the buttocks and was taken to Saint Bernard Hospital and Health Care Center, where his condition stabilized.

About three hours earlier, a 14-year-old boy was gunned down in the Back of the Yards neighborhood on the South Side.

Leonardo Betancourt was in the back seat of a vehicle traveling north in the 4500 block of South Ashland at 6:34 p.m. when the other people in the car heard gunshots and realized the boy had been shot in the back, authorities said.

The driver took the teen to a firehouse a block north in the 4400 block of South Ashland, police said.

Betancourt was then taken to Stroger Hospital, where he was pronounced dead at 7:34 p.m., the medical examiner’s office said. He lived in the 4500 block of South Hermitage.

It was not immediately known if the teen was the intended target, police said.

Earlier Monday, a 21-year-old woman was shot to death in the Edgewater neighborhood on the North Side.

The woman and a male were in a vehicle stopped at a red light in the 5900 block of North Ridge about 12:55 a.m. when another male got out of a gray car nearby and opened fire, police said.

The woman was shot in the head and taken to Presence Saint Francis Hospital in Evanston, where she was pronounced dead, police said. The medical examiner’s office has not released her identity, pending notification of her family.

A police source said the male sitting in the vehicle’s passenger seat is a documented gang member. He was not injured in the shooting.

Most recently, two men were shot Monday night in the South Side Englewood neighborhood. The men, ages 23 and 27, were in a vehicle stopped at a red light in the 700 block of West 71st Street about 11:15 p.m. when a dark-colored car pulled up alongside and a male inside opened fire, police said. The younger man was shot in the back, while the older man suffered gunshot wounds to the right arm and left leg. They drove to Saint Bernard Hospital and were both later transferred to Stroger Hospital, where their conditions were stabilized. A police source said both men are documented gang members.

About 9:05 p.m., a woman was shot in the West Pullman neighborhood on the Far South Side. The 22-year-old was riding in a vehicle when she drove past a group of males standing in the 300 block of East 116th, police said. She then heard gunshots and realized she was shot in the head. The woman was taken to Christ Medical Center, where her condition stabilized.

Earlier Monday afternoon, a 24-year-old man suffered a graze wound to the head in a shooting in the East Garfield Park neighborhood on the West Side. The shooting happened about 1:35 p.m. in the 3300 block of West Congress, police said. The man was taken to Mount Sinai Hospital.

Monday’s first nonfatal shooting happened shortly after 9 a.m. in another West Pullman neighborhood attack. A 19-year-old man was standing in the alley in the 12400 block of South Lowe when a black car drove by and a passenger fired shots, police said. The victim was shot once in the buttocks and ran to the 12400 block of South Wallace, where he collapsed. Paramedics took him to Christ Medical Center, where he was listed in critical condition.