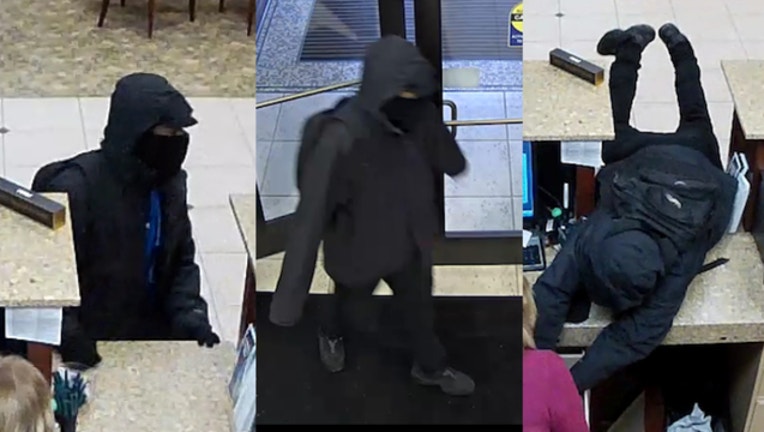 Surveillance images of the suspect in an Oct. 31 robbery at the Gurnee Community Bank branch at 675 N. O’Plaine Road in Gurnee. | Gurnee police

The non-takeover bank robbery happened just before 4:15 p.m. at the Gurnee Community Bank branch at 675 N. O’Plaine Road in Gurnee, according to statements from the FBI and Gurnee police. No weapon was displayed and no injuries were reported.

The suspect was described as a 5-foot-8, 150-pound black man between 18 and 20 years old with a slender build, the FBI said. He had short black hair and was wearing a dark blue hooded jacket, a blue shirt, a black ski mask, black gloved, black pants, dark gray shoes and a black backpack.

He rode away from the bank on a bicycle and was last seen near Old Grand Avenue and Depot Road, police said.

A reward of up to $1,000 was being offered for information leading to the man’s arrest. Anyone with information was asked to call the FBI’s Chicago Field Office at (312) 421-6700.