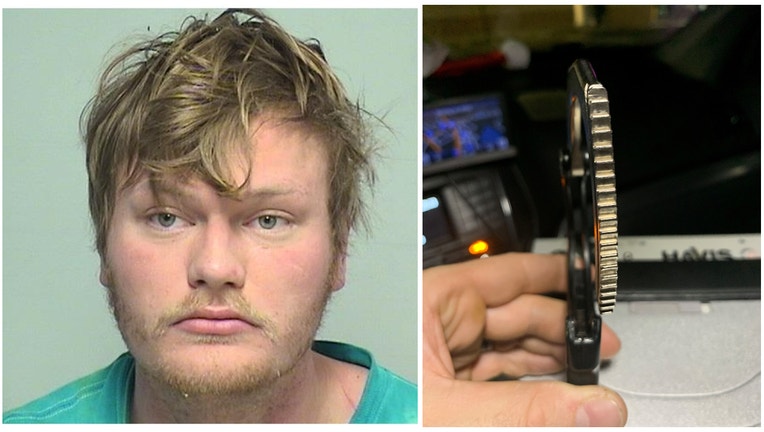 Shane Zillman (left) broke free from these handcuffs after an arrest in Lake County on Jan. 1, 2020 | Lake County sheriff's office

BARRINGTON, Ill. - A man from an unincorporated area near Barrington pried open his handcuffs and tried to run from police during a DUI arrest on New Year’s Day in the north suburbs, authorities say.

Shane Zillman, 27, freed one of his hands from the cuffs while in the backseat of a squad car as he was being taken to jail, the Lake County sheriff’s office said in a statement.

A deputy opened the door of the squad car and Zillman ran past him, the sheriff’s office said. The deputy used a Taser on him, took him back into custody and walked him to the jail.

“He’s a pretty big guy, 6-foot-7,” Covelli said. “He was able to torque his arms with enough strength for the cuff to bend at the hinge.”

Covelli said the sheriff’s office was contacting the manufacturer about the cuffs.

“We’re lucky he didn’t use the handcuffs as a weapon against the deputy,” he said.

Zillman was ordered held on a $200,000 bail on charges of criminal damage to state property, domestic battery, escaping from a police officer, driving under the influence of alcohol, driving on a suspended license, illegal transportation of alcohol and unsafe opening of vehicle doors, according to the sheriff’s office.

Zillman was initially arrested about 5:40 p.m. for DUI at a park on Shady Lane in an unincorporated area near Barrington, the sheriff’s office said.