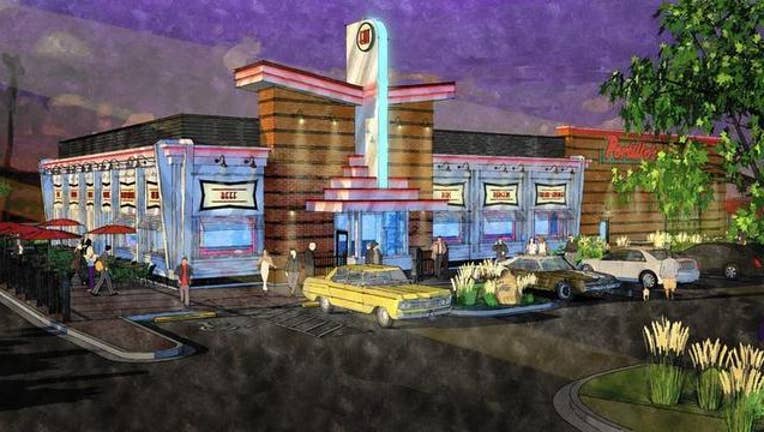 A rendering of the proposed Portillo's Wisconsin restaurant. (Portillo's)

CHICAGO (FOX 32 News) - Cheeseheads, rejoice - a Portillo's will be opening in the Badger State next year!

Portillo's, the Chicago-eatery known for its Italian beef and hot dogs, announced Wednesday it has submitted site plans to build a restaurant in Brookfield, Wis., just west of Milwaukee.

Pending city approval, the proposed restaurant will open in the second half of 2016. The location would be the chain's first in Wisconsin.

"We are excited at the opportunity to bring Portillo's to Brookfield, Wisconsin," Portillo's CEO Keith Kinsey said in a statement. "We look forward to introducing the greater Milwaukee area to our legendary food and service."

The proposed restaurant would be on Bluemound Road, west of Calhoun Road, at The Shoppes at the Corridor, a new mixed-use development project.

"We have visited the Portillo's in Vernon Hills, Ill., and we came away very impressed with the service, the food, and the unique historic decor," Ponto said in a statement. "Dick Portillo and his team have been great to work with and we look forward to welcoming the first Portillo's in Wisconsin to Brookfield."

The planned Wisconsin restaurant is just one of a few planned for the Oak Brook chain. After the Chicago Blackhawks defeated the Tampa Bay Lightning in the Stanley Cup Final, the company announced plans to open the first Florida location in Brandon, just outside Tampa, next Spring.

There are also plans to open a location in Gurnee next month. Plans for a South Loop Portillo's are still in the works. Last month, the company applied for a building permit at 520 W. Taylor Street.

The Taylor Street location would be the second location in the city of Chicago.