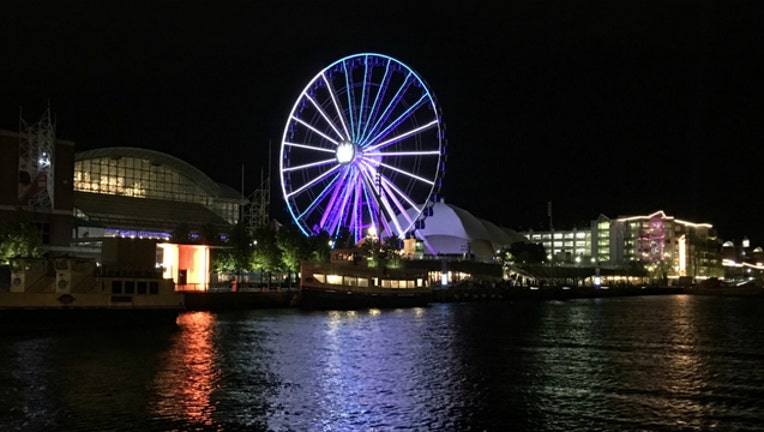 CHICAGO (Sun-Times Media Wire) - Navy Pier’s new Ferris Wheel opened to the public Friday morning to great fanfare and an electrical glitch — some 100 people got stuck airborne for about 30 minutes after a power outage Friday night, the Chicago Sun-Times is reporting.

The Centennial Wheel was opened to the public at around 11:30 am. Friday, and saw some 8,000 to 10,000 riders throughout the rainy day, before the 8 p.m. incident. About 100 people were stranded in mid-air when the electricity went out, officials said. The electricity returned within a half hour, and riders disembarked safely, officials said.

“We had a little electrical issue with the wheel,” said Jon Kaplan, the Pier’s interim director of communications.

“It was not full. It can hold 420 people, and there were about 100 people on there. They were perfectly safe and fine and comfortable. And fortunately, these new gondolas are made to be used in all kinds of weather, so people just relaxed and waited for us to get the power back on. We kept them informed every two minutes. Everybody was fine and calm.”

“The wheel started running again, and we got everybody off in a normal fashion. There was no emergency evacuation or anything. We gave them a full refund, along with a complimentary ticket to come back,” said Kaplan.

“We apologized profusely, and everyone was very good-natured about it. You know the new gondolas are nice, fully enclosed, with plush seats, air conditioning, and video screens in them you can watch, nothing like the old Ferris wheel,” he said.

Because of the rain, no one else was allowed back on the ride after the glitch, but the Ferris wheel’s light show went on as planned, in conjunction with fireworks, Kaplan said. And officials expect it to be up and running Saturday morning and through the Memorial Day weekend, Kaplan said.