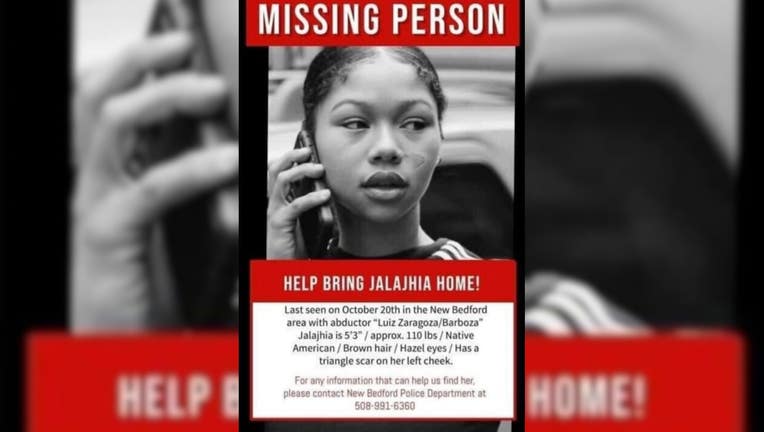 The body of a pregnant Massachusetts woman last seen in October was found in Florida, authorities announced this week.

Florida law enforcement officials found the body of Jalajhia Finklea, 18, of the Mashpee Wampanoag Tribe, around noon Wednesday in a field off Interstate 95 in Fellsmere.

A positive identification is still pending, the Bristol County District Attorney's Office in Massachusetts said. An autopsy will be conducted to determine the cause of death, which is believed to be a homicide.

Finklea was last seen Oct. 20 getting into a vehicle driven by Luis Zaragoza in New Bedford. He rented the car from Logan International Airport in Boston, authorities said.

The district attorney's office said Finklea last used her cell phone to call Zaragoza. Cell phones belonging to her and Zaragoza were both turned off minutes after she entered the vehicle, authorities said.

Investigators found Finklea's phone on Route 140 in New Bedford, 5 miles from where she got into the car with Zaragoza.

"As a result of those efforts, police determined the suspect had left the state and traveled south along the eastern seaboard to Florida," the district attorney's office said.

Surveillance footage showed Zaragoza, who also went by the name Luis Barboza, at several locations during a two-week period. None of the footage captured Finklea. Massachusetts authorities then contacted the U.S. Marshals Service for assistance in locating the pregnant teen.

Marshals found Zaragoza in Florida on Nov. 4 and began watching him. The next day, the task force attempted to arrest him at a McDonald's parking lot in Crestview. Zaragoza, who was armed with a handgun, was shot and killed as authorities tried taking him into custody.

The investigation into the shooting is being conducted by the Florida Department of Law Enforcement.