WASHINGTON - President Joe Biden visits Chicago next Wednesday, the White House announced Thursday, the first time he has been in the area since October.

The convention was originally scheduled for last August and delayed because of the COVID-19 pandemic. Chicago was selected as the convention site in 2017 and a release from that year noted that Locals 134, 9, 214, 794 and 1220 will be convention hosts.

According to the IBEW release, the convention is to be held at the Lakeside Center, part of the McCormick Place convention complex.

Biden landed Air Force One at O’Hare last October for an event in Elk Grove Village promoting his orders for larger businesses to mandate COVID-19 vaccines or weekly tests.

The president joked at that event that "Fox News requires vaccinations for all employees. Give me a break. Fox News." Biden did a version of that same joke during his speech at the White House Correspondents’ Association dinner last Saturday.

Biden delivered his remarks at a suburban Chicago data center that Clayco, a construction company, is building for Microsoft. 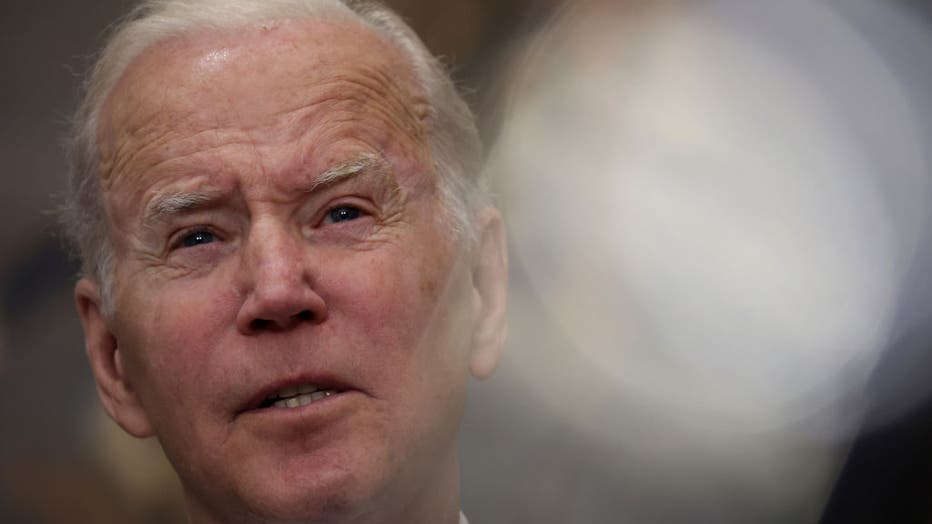 U.S. President Joe Biden speaks during an event at the Roosevelt Room of the White House on May 4, 2022 in Washington, DC. President Biden delivered remarks on economic growth, jobs, and deficit reduction. (Photo by Alex Wong/Getty Images)

The venue was selected because Clayco, headquartered in Chicago, was among the first wave of companies voluntarily following Biden’s order that at the time required larger companies to ask workers to be vaccinated or undergo weekly testing.

In July 2021, Biden headed to McHenry County College in Crystal Lake in northwest Illinois to tout his infrastructure bill and the "Build Back Better" domestic agenda and Rep. Lauren Underwood, D-Ill., Biden ventured into political turf where ex-President Donald Trump remains popular to push for the "human infrastructure" agenda that so far has not passed.

Biden toured the McHenry County College Children’s Learning Center and in his speech said, "It’s an amazing resource.  Students and faculty can have their children cared for.  Students can earn their associate degrees in early childhood education as well.  High-quality child care options should be the rule, not the exception.

"…There’s a lot of work ahead of us to finish the job, but we’re going to get it done.  We’re going to reimagine what our economy and our future could be, and show the world — just as importantly, we’ll show ourselves — that democracy — democracy can deliver for the people of Illinois and the people of America, and the world can lead again."

Said Biden, "Thank you, ladies and gentlemen.  I know that’s a boring speech, but it’s an important speech."

Vice President Kamala Harris was in Chicago in April 2021 to tour a COVID-19 vaccination center at 2260 S. Grove St., organized by the Chicago Federation of Labor.