PARIS (AP) - News that the world’s most powerful man was infected with the world’s most notorious disease dominated screens large and small, drawing shock, sympathy and some barbs for President Donald Trump.

The outpouring from world leaders and flagging markets Friday left little doubt that Trump's illness will have global implications — even if they're still unknown. Trump's announcement on Twitter that he and first lady Melania Trump tested positive for the coronavirus prompted a multitude of responses on the same platform, as well as others.

The positive test reading adds to investors' worries, especially about its effect on the Nov. 3 election between the Republican president and Democrat Joe Biden. U.S. stock futures and most world markets fell on the news as did the price of oil.

From India to Qatar to Mexico, world leaders were quick to offer official sympathy from the top, many in the form of tweets directly to Trump, while something approaching schadenfreude bubbled up from elsewhere. Trump is the most prominent on a growing list of powerful people who have contracted the virus, including many who were skeptical of the disease. Among his well-wishers were at least two who have recovered from the illness.

“I'm sure that your inherent vitality, good spirits and optimism will help you cope with the dangerous virus,” Russian President Vladimir Putin wrote in a direct message to Trump released by the Kremlin.

World Health Organization director-general Tedros Adhanom Ghebreyesus tweeted “My best wishes to President @realDonaldTrump and @FLOTUS for a full and speedy recovery.” The Trump administration in July formally notified the United Nations of its withdrawal from WHO, although the pullout won’t take effect until next year. Trump claims the U.N. health agency is in need of reform and is heavily influenced by China. The U.N. secretary-general also sent in best wishes.

Italian right-wing opposition leader Matteo Salvini tweeted: “In Italy and in the world, whoever celebrates the illness of a man or of a woman, and who comes to wish the death of a neighbor, confirms what he is: An idiot without soul. A hug to Melania and Donald.″

British Prime Minister Boris Johnson, who was hospitalized for a week in April after he contracted COVID-19, wished Trump a “speedy recovery.”

Former Italian Premier Silvio Berlusconi, who also recently recovered from a serious bout with coronavirus, has sent a message to Trump and the first lady extending his best wishes for a speedy recovery.

“I know this illness from direct experience, that can manifest itself also in an insidious way, but which can be overcome with correct and courageous behavior,″ Berlusconi said in a message.

“We need politicians, especially politicians like President Trump who has a lot of power and influence, to take this seriously and to support their scientists and clinicians in leading the outbreak management, rather than have political influence in trying to deny that this virus is in circulation and drag your feet around control measures because it suited your agenda.”

Tokyo Gov. Yuriko Koike, speaking at a weekly news conference, did not mention Trump's reluctance to wear masks when asked about his infection, but she said the news “reminded me of how widely masks are worn in Japan.” 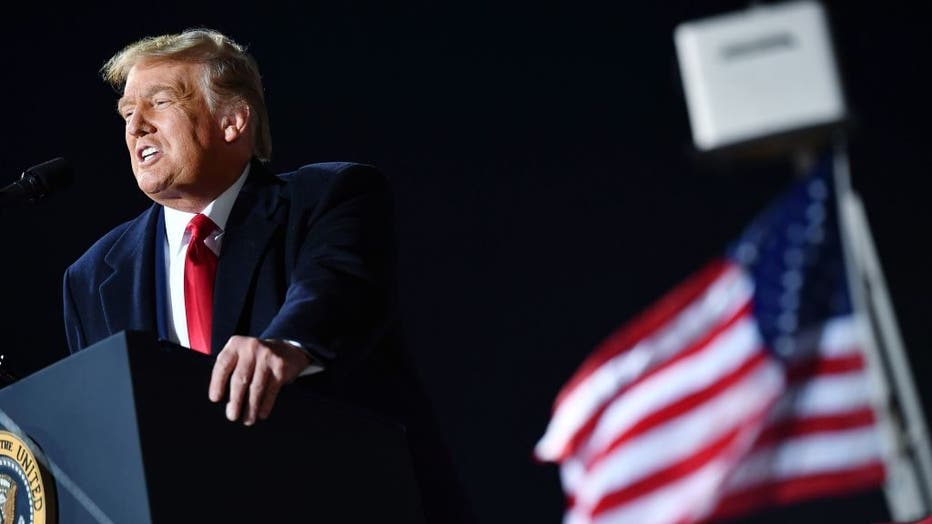 Major media across the globe played up the announcement, with bulletins crawling across TV screens in Paris and Rome, Seoul and Beijing.

“To say this potentially could be a big deal is an understatement,” Rabobank said in a commentary. “Everything now takes a backseat to the latest incredible twist in this U.S. election campaign.”

China’s official Xinhua News Agency flashed the news, and an anchor on state broadcaster CCTV announced it. Late Friday, the Chinese Foreign Ministry spokesman Hua Chunying tweeted that he was “saddened to learn President and the FirstLady of the US tested positive. Hope they both have a speedy recovery and will be fine.”

The positive test result was the most searched topic in China on the widely used social media app Weibo for hours after the announcement, with most comments mocking or critical.

One user darkly joked that Trump had finally tweeted something positive.

The Chinese government has bristled at Trump’s attempts to blame China, where the disease emerged, for the pandemic and called for global cooperation in fighting it. It's a message that has resonated with the public.

Hu Xijin, the outspoken editor of the state-owned Global Times newspaper, tweeted in English that “President Trump and the first lady have paid the price for his gamble to play down the COVID-19.”

Al-Arabiya, a Saudi-owned satellite channel based in Dubai, cut to a long live shot of the White House. Qatari state-owned Al Jazeera channel brought in four commentators to discuss the “prevailing state of uncertainty” in the United States, questioning whether Trump could effectively steer a reelection campaign and run the country from quarantine. Middle East leaders closely allied to the U.S. sent out their best wishes, including Kuwait's new ruling emir.

Iranian state television announced Trump had the virus, an anchor breaking the news with an unflattering image of the U.S. president surrounded by what appeared to be giant coronaviruses. Later, an anchor noted that “the American president, who treated the coronavirus almost like it was nothing, finally caught it.”

Social media platforms were ablaze with questions and quick reactions to all the unknowns.

Would Trump blame the Chinese? Would he thumb his nose at his critics and enemies by breezing through the quarantine without serious symptoms, tweeting away from the White House? Would he become gravely ill, or worse, and, if he did, what would that mean for the U.S. election, one of the most contentious in recent history? What would it mean for U.S. leadership during tumultuous times?

While the uncertainty seemed palpable on a scroll through various social media in an array of languages, many seemed to revel in the announcement.

And the satirical Australian news site, the Betoota Advocate, posted a story with this headline: “Trump Family Records More Cases Of Community Transmission Than Entire State Of Queensland.”