Despite the gloomy skies and on-and-off rain, there was nothing but smiles on the faces of White Sox fans as they entered Guaranteed Rate Field for the first time since 2019.

Pritzker and Lightfoot were greeted by a chorus of boos as they walked onto the field ahead of the first pitch. A reporter for the Chicago Sun-Times noted that the Democratic politicians drew more boos while walking onto the field than the White Sox opponent, the Kansas City Royals.

About 9,000 fans were slated to attend the team’s first home game of the 2021 season. Attendance at White Sox home games is currently limited to 22% capacity in order to comply with coronavirus-related restrictions.

Lightfoot, who has served as Chicago’s mayor since 2019, is a White Sox season ticket holder. She was also booed while attending the crosstown Chicago Cubs’ home opener at Wrigley Field last week. 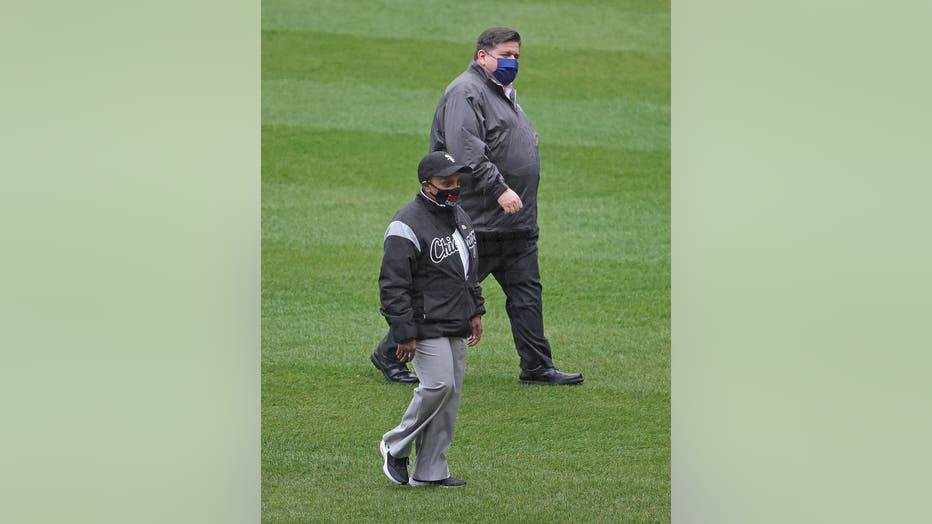 CHICAGO, ILLINOIS - APRIL 08: Chicago Mayor Lori Lightfoot and Illinois Governor J.B. Pritzker leave the field after presiding over the ceremonial first pitch before the Opening Day home game between the Chicago White Sox and the Kansas City Royals a

Lightfoot has faced criticism from both sides of the aisle during her tenure. In a recent column, the Chicago Tribune noted the mayor "hasn’t yet fulfilled key campaign promises," such as a pledge to implement an elected school board.

An outspoken City Council critic of Lightfoot said fans were expressing their disgust with the mayor’s failed promise to reduce violent crime.

"People are frustrated with the carjackings. People are fed up with the shootings and kids getting shot and killed, and the shootings on the expressways, and kids not being in school. And, on top of that, we're still in the middle of a COVID disaster," said Alderman Anthony Beale of the South Side 9th Ward.

Like Democratic governors in several other states, Pritzker has faced criticism for establishing harsh restrictions during the coronavirus pandemic. The governor defended his handling of the crisis while unveiling his state budget proposal in February.

"All of this was in the pursuit of one goal and one goal only — saving as many lives as possible," Pritzker said, according to the Chicago Tribune.

Richard Porter, an Illinois member on the Republican National Committee who may run for governor next year, linked the booing to Pritzker’s handling of COVID-19.

"At this stage of the pandemic, we ought to be looking for ways to encourage people to start living their lives again," Porter said. "We shouldn't have ridiculous restrictions on the number of people in the ballpark, for example. You're outdoors!"

When FOX 32 News tried to ask Pritzker and Lightfoot what their takeaway from the experience was, their press aides ignored our calls, texts and emails.